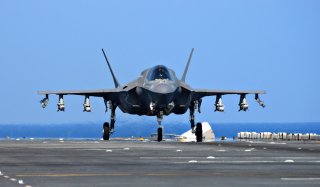 The U.S. Army’s Project Convergence, which seeks to ensure the Joint Force’s interconnectedness on the modern battlefield, is set to begin its latest annual iteration this fall. The project has been a priority in the Army’s efforts to better integrate and network across the Navy, Marine Corps, Air Force, and Space Force.

Beginning with paradigm-changing breakthroughs in 2020, the Army’s Project Convergence Campaign of Learning evolved in 2021 to increasingly demonstrate multi-domain connectivity, meaning land, air, and even some maritime nodes were incorporated.

“We really started to bring to light the idea of convergence across domains to include cyberspace, air, land and, to a lesser extent, maritime,”  Maj. Gen. John Rafferty, director of the Long Range Precision Fires Cross-Functional Team at Army Futures Command, told the National Interest in an interview.

The concept, as demonstrated in 2021, was to not only network Army mini-drones to helicopters, ground vehicles, and AI-enabled command and control, but also to extend the connectivity to Air Force and Navy nodes to enable a joint warfare synergy. This tactical and strategic emphasis represents the Army’s contribution to the Pentagon’s Joint All Domain Command and Control (JADC2), which is intended to enable Air, Land, Sea, Cyber, and Space synergy through data analysis and transmission in real-time. The concept is to optimize joint, multi-domain attacks across otherwise disparate areas of warfare, in essence creating a “meshed” combat network of interoperable nodes through which to truncate sensor to shooter time, analyze variables in relation to one another, and inform commanders of combat developments.

Project Convergence 2022, Rafferty said, will expand even further beyond JADC2 to incorporate coalition partners, such as NATO allies. The Pentagon effort, which recently entered a key “implementation phase” outlined by Deputy Defense Secretary Kathleen Hicks, seeks to conduct warfare at the “speed of relevance.” For instance, perhaps an Air Force fighter jet, drone, or bomber might see an otherwise obscured target and have the ability to instantly network the critical data to attacking ground units without having the latency of needing to send details to a separately operated command and control center. Much of the critical decision-making, which of course includes humans when lethal force is used, can now take place at the edge of combat because command and control is expedited, decentralized, and streamlined across services and domains.

“Project Convergence ‘21 began to bring in the joint partners. Then you know, that idea of convergence even comes to light even more and also begins to illustrate the JADC2 concept. A leapfrog into [Project Convergence] ‘22’s joint warfighting concept has matured and the functional concepts have matured, so we're able to expand our experimentation into joint warfighting concepts,”  Rafferty explained.

Interestingly, demonstrations of multi-domain connectivity were also shown during the initial Project Convergence exercise in 2020. Marine Corps F-35Bs were able to share combat-relevant data, such as navigational and targeting information, with ground-operating Army infantry. This is something the Army and its joint partners are continuing to build upon in subsequent exercises and will likely play a major role in connecting allies to one another.