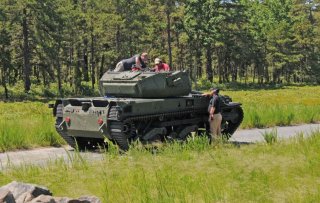 Attack possibilities and new tactical applications are greatly multiplied by using an unmanned vehicle, which can integrate many heavy armor technologies into a lighter weight, high-speed, deployable system.

“When you design just to be remote, you can accomplish many of the things of a larger vehicle and a much smaller package, because obviously, you don't have to package people and then you don't have to package protection. And so it's likely that we'll see the kinds of capabilities that historically would track to a larger platform in smaller and lighter platforms,” Maj. Gen. Ross Coffman, Director of the Next-Generation Combat Systems Cross-Functional Team at Army Futures Command, told the National Interest in an interview.

Coffman explained the service is now refining requirements and testing prototype RCV-Ms and plans another intense set of evaluations at Fort Hood, Texas, next year. Some of the Army’s industry partners include Textron Systems, QinetiQ, and General Dynamics Land Systems.

“We're gonna do company-level operations in Texas, using offensive and defensive scenarios, to really hone the requirements in the lessons of some of the things on future battlefields,” Coffman said.

Without needing to operate with heavy armor to protect a crew, a robotic armed vehicle can integrate a wide sphere of technologies to include advanced computing, electronics, multi-domain command, and control equipment, and a wide range of weapons.

“RCVs are payload agnostic. We can have counter-drone, we can have smoke, sensors, and lethality. We can have anything that you can imagine on the battlefield on a robot. That is exciting stuff,” Coffman said.

Some may fire 30mm or 50mm cannons, javelin anti-tank weapons or find targets for overhead precision air attack. As new technologies are tested, the Army anticipates it will continue to refine concepts of operation. As various innovations are introduced, the Army will make assessments and evaluate what Coffman described ast “trade spaces” with which to evaluate options for the vehicles.

“These cannons (30mm and 50mm) are providing trade spaces for Army senior leaders to make decisions that will absolutely change the geometry and the lethality of future vehicles,” he added.