The Army's TRX Robotic Ground Vehicle Will Plow Through Minefields 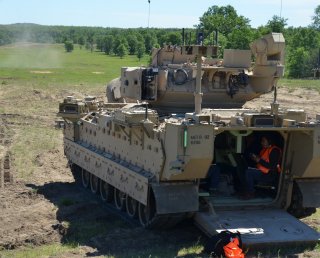 What would it mean for future combat if an armed robotic vehicle could launch a mini attack drone into the air to destroy an approaching aircraft or ground vehicle?

The Army wants to find out and is working with the defense industry to experiment with and develop a suite of weapons and sensors for a new generation of ground robots.

One industry innovator is now supporting the Army’s Robotic Combat Vehicle-Medium (RCV-M) development effort. General Dynamics Land Systems (GDLS) is now prototyping the TRX robotic ground vehicle, which is able to breach obstacles using a plow blade and clear mines with a manipulating arm. The vehicle can also be armed with a 30mm cannon.

Earlier this year the TRX was demonstrated to the Army as an autonomous resupply vehicle using standard military cargo containers, but it can also be configured for surveillance and attack missions.

Another possibility, as described by GDLS innovators, could involve the use of drones such as Aerovironment’s Switchblade, a small drone that can be used as a surveillance node or itself become a munition able to descend upon and explode a target. While capable of launching drones, the TRX is being engineered by GDLS as a multi-mission, modular robot intended to integrate a variety of payloads, sensors, and weapons. The intent is to build a platform with technical standards and “open architecture” such that it can accommodate a wide sphere of technologies and integrate new ones as they become available. GDLS developers seek to align with the Army’s evolving requirements and offer an adaptable platform.

The Army is now evaluating prototypes RCVs from GDLS as well as QinetiQ and Textron Systems. The service, of course, takes no position on a particular industry offering during a source selection process, but senior service weapons developers do describe the overall vision for the platform.

“RCVs are payload agnostic. We can have counter drone, we can have smoke, sensors and lethality. We can have anything that you can imagine on the battlefield on a robot. That is exciting stuff,” Maj. Gen. Ross Coffman, Director, Next-Generation Combat Vehicle Cross Functional Team, Army Futures Command, told the National Interest in an interview.

The GDLS MUTT was selected in 2019 and 2020 by the Army for its Small Multipurpose Equipment Transport program which will be fielded to IBCTs in 2022. TRX, according to GDLS information, is optimized for varying levels of autonomy, direct and indirect fire, autonomous resupply, electronic warfare missions, and counter-drone operations in support of mobile formations like the Armored Brigade Combat Team (ABCT) and Stryker Brigade Combat Team (SBCT). TRX can be directly controlled by an operator or remotely operated from semi-autonomous mode to fully autonomous, depending upon Army requirements and mission objectives. As a modular platform, the TRX can be used in a variety of different configurations for unmanned-unmanned teaming.