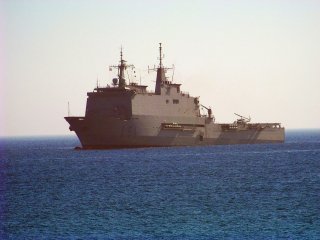 The Spanish navy is deploying one of its amphibious assault ships in order to help its exclave city of Mellila cope with the coronavirus pandemic.

“It will take us only 24 hours to mobilize the crew, and once at sea, the ship will need between four and six hours to sail from its naval base in Rota to Mellila,” the Spanish defense ministry announced on March 31, 2020.

The ship set sail with an SH-3 helicopter fitted with medical-evacuation equipment plus a pair of ambulances and a contingent of marines trained in decontamination.

In sending the landing dock Galicia to Mellila, a Spanish city adjacent to Morocco on the North African coast, the Spanish fleet is pursuing a strategy similar to what the French and U.K. navies are pursuing.

Both the French and the British are deploying their own amphibious and auxiliary ships to overseas territories whose own medical facilities might be inadequate to handle a surge of coronavirus cases.

The French navy is sending the Mistral-class big-deck amphibious ships Mistral and Dixmude respectively to the French territory of Reunion in the Indian Ocean and to France’s Carribean territories.

The Royal Navy meanwhile is deploying the auxiliary vessel Argus, a casualty-receiving ship that doubles as a helicopter-training platform, to the Carribean to assist the United Kingdom’s British West Indies territories.

Neither Galicia, the Mistrals nor Argus technically are hospital ships in the way that the U.S. Navy’s purpose-built hospital vessels Comfort and Mercy are. But amphibious vessels and auxiliaries often feature extensive medical facilities that, with some modification, could even support isolation units for infectious patients.

The French navy in late March 2020 quickly set up isolation wards aboard the Mistral-class ship Tonnerre in order to transport coronavirus patients from the island of Corsica to hospitals on the mainland.

The Spanish navy operates two Galicia-class vessels. Displacing 16,000 tons of water, they are small by the standards of American or U.K. amphibs. Galicia routinely can accommodate around a dozen patients in its medical ward. Sister vessel Castilla boasts a more flexible design, and has a surge capacity of 105 patients.

By contrast, Comfort and Mercy each have 1,000 patient beds. Mercy is moored in the Port of Los Angeles. Comfort is off New York City. The vessels aren’t actually treating coronavirus patients. Rather, they’re handling non-virus trauma cases in order to free up beds and personnel in civilian hospitals.

But with residents in New York City and Los Angeles mostly staying home, there are few non-coronavirus cases for the huge hospital ships to treat. Comfort as of April 3, 2020 had on-board just 20 patients. Mercy at the same time had just 15 patients.

It’s unclear exactly how Spanish health authorities will use Galicia. Melilla, one of two Spanish cities in Africa -- the other being nearby Ceuta -- has a population of 87,000 and has reported 62 cases of covid-19 and one death.

Like Comfort and Mercy, Galicia might offer up its patient beds to non-virus cases in order to free up hospital resources.

In addition to the Galicia-class vessels, the Spanish navy has made several other amphibious and auxiliary ships available for pandemic missions, including the flagship Juan Carlos, a big-deck assault ship with 26 permanent patient beds and a surge capacity of an additional 122 beds.

Ceuta, the other Spanish city in Africa, has requested a ship.