Attack From Below: The Navy Is Going Big on Mine-laying Underwater Drones 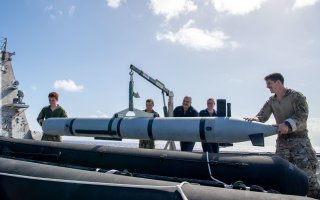 The United States Navy would like to have a flotilla of unmanned submarines on patrol throughout the world’s oceans, ready at a moment’s notice to lay naval mines in support of U.S. Navy operations. The submarines, called Orca extra-large unmanned underwater vehicle, also known as the XLUUV, would be approximately 85 feet in length and, while not exactly small, is dwarfed by the Navy’s full-size submarines.

The U.S. Navy estimates the Orca’s weight at 80 tons, a weight point that precludes launch from other U.S. Navy ships or submarines, raising questions about how the Orca would be recovered, refueled, and rearmed after expending mines or additional ammunition.

The Orca’s overall design is smooth and streamlined. Unlike traditional submarines, the Orca’s mast would be stowable and deployed near the surface, offering the platform a low-drag cross-section.

Capitan Scot Searles, a Navy program manager for Unmanned Maritime Systems, explained that the Orca’s payload module will be 34 feet long and will house the naval mines the unmanned vehicle will carry during the International Mine Technology Symposium of the Mine Warfare Association earlier this month. Sea Power Magazine first reported the information.

The Orca is “an open-architecture, reconfigurable UUV that will be modular in construction. The XLUUV core vehicle will provide guidance and control, navigation, autonomy, situational awareness, core communications, power distribution, energy and power, propulsion and maneuvering, and mission sensors,” the report explained.

“The Orca, too large to be carried by a submarine, will be pier-launched. Mine laying will be the first role for the XLUUV.”

“Getting that large, unmanned diesel submarine put together and then putting it in the water is a big deal,” Capitan Searles said. “It’s an important step in the development of the program to be able to have the components together, do a fit check and then an in-water check. We will continue populating the hull and begin to do in-water testing later this summer, all driving program maturity forward.”

The Orca’s tail section features a shrouded propeller, a design choice that reduces propeller noise and can improve efficiency. The Orca’s design is broadly similar to the Echo Voyager, a test platform built by Boeing which had an endurance of six months.

That vehicle could travel on the power provided by onboard batteries for 150 miles and had enough fuel to travel 7,500 miles, or about the distance from San Francisco, California, to Sydney, Australia. The Orca is expected to have an improved range over its predecessor.

By investing in long-range unmanned underwater vehicles, the Navy is betting it can use platforms like the Orca to be a force multiplier and to augment the Navy’s submarine fleet, helping to block-off maritime chokepoints and, perhaps with the addition of a torpedo payload, hunt down enemy submarines.