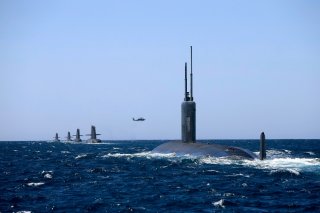 The United States has appointed a senior U.S. Navy officer to head up the American leg of the AUKUS triad, choosing a U.S. Navy attack submarine admiral to the post. The officer, Rear Adm. Dave Goggins, will take the title of special assistant and support the Australia-United Kingdom-United States partnership.

“Admiral Goggins selection to lead AUKUS will further our efforts to strengthen our strategic partnerships with Australia and the United Kingdom. Dave comes to us at a critical time in the consultation period of AUKUS and is the right person to spearhead the analysis of the submarine development production and testing efforts,” Secretary of the Navy Carlos Del Toro said in a statement.

“Under his leadership, I’m confident the AUKUS team will help meet the objective of determining the best path toward equipping the Royals Australian Navy with a nuclear-powered, conventionally-armed class of attack submarines by March 2023. Rear Adm. Goggins will also be leading the planning and standup of the enduring U.S. Navy efforts to implement whichever approach the Australians choose at the end of the consultation period.”

“This move strengthens the AUKUS’s submarine’s initiative and demonstrates our commitment to the United States’ allies,” Secretary Del Toro added.

The AUKUS partnership, announced in September of last year, promises to equip the Royal Australian Navy with its own nuclear-powered submarines. The partnership was a revelation and a significant break from past United States policy.

France also perceived the deal as a significant slight since they had been in advanced talks with Australia to build replacement submarines for Canberra’s aging Collins-class submarines. Paris was blindsided by the announcement and decried the secretive nature of the announcement, which the French said was made without allied consultation.

Still, the submarines that France offered to build for Australia would have been conventionally powered, a significant disadvantage compared to the United States and United Kingdom’s nuclear-powered offerings.

The AUKUS program is currently conducting a year-and-a-half study to investigate how the United States and the United Kingdom can best train and equip the Australians to prepare them to field a nuclear submarine.