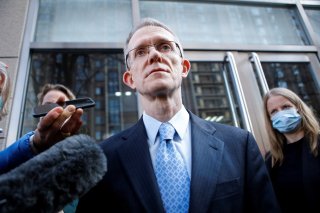 On Thursday morning, China opened its trial against Australian journalist Cheng Lei on charges of supplying Chinese state secrets to Australia, further straining relations between Beijing and Canberra amid a broader diplomatic crisis.

The legal proceedings have been criticized by the Australian government, which accused Beijing of failing to meet “basic standards of justice” in the run-up to the trial. The trial is being held at the No. 2 People’s Intermediate Court in central Beijing and is not open to the media or the public. Australia’s ambassador to China, Graham Fletcher, told reporters outside the courtroom on Thursday that he had not been allowed access to the trial—a step that he described as “deeply concerning, unsatisfactory, and regrettable.”

“We can have no confidence in the validity of [a] process which is conducted in secret,” Fletcher said, adding that the Australian government would continue to monitor the situation and “advocate strongly for Ms. Cheng Lei’s rights and interests.”

Cheng, who was born in China, had worked in Beijing as a journalist for the country’s state-run CGTN news network prior to her detention in August 2020. CGTN is widely described in the West as a propaganda outlet, and its broadcasting license was revoked in Britain in early 2021 over an alleged lack of editorial independence, prompting China to ban the BBC in retaliation.

Beyond the charge of espionage, little is known about the accusations against Cheng, and it is unclear how she could have gained access to Chinese state secrets, as she has been an Australian citizen since 2003. China does not recognize dual citizens and automatically revokes Chinese nationality for native Chinese who acquire foreign citizenship.

Cheng’s family has maintained her innocence and insisted that she be allowed to speak to her children, who she has reportedly not been in contact with since her arrest. Representatives of the Australian government have been allowed to visit her once per month, and her lawyer, who has been in regular contact with her, has told the Australian press that she remains in good health.

Australia and China have experienced growing tensions for the past half-decade, but these tensions escalated into open conflict in 2020 after Australian leaders called for an independent investigation into the origins of the COVID-19 pandemic, leading China to ban several Australian imports. Beijing has also protested the activities of the “Quad,” the security dialogue between the United States, Australia, Japan, and India—a grouping widely perceived as a bulwark against Chinese expansion in the Indo-Pacific region.

In addition to Cheng, Chinese-born Australian writer and former Atlantic Council senior fellow Yang Hengjun has been detained in China since 2019 on similar espionage charges. Yang and his lawyers have denied the accusations.