The B-21 Stealth Bomber May Achieve Breakthrough Levels of Stealth 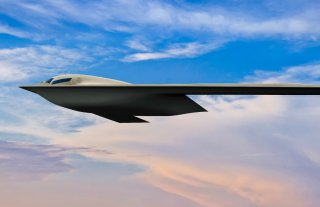 Stealth configuration such as blended wing-body aircraft, heat-signature management, and internally buried engines are all trademark elements of stealth bomber technology, yet alongside these well-known stealth properties, advanced sensing, computing, and artificial-intelligence-enabled data organization are all fast-growing technologies able to greatly improve stealth performance for an aircraft.

The rapid technological maturation of Russian and Chinese air defenses, and their growing proliferation around the world, is likely one reason the Air Force is making ambitious and technologically sophisticated upgrades to the B-2 bomber. B-2 bombers are now being engineered with a special new technology called the Defensive Management System, an advanced sensor designed to find the locations of enemy air defenses, inform bomber crews, and therefore enable B-2 pilots to navigate away from or “around” these air defense systems.

The B-21 bomber does look like a B-2 bomber in a more general way, yet it is potentially much stealthier. The engine inlets, for instance, appear much more conformal and blended into the body of the aircraft, unlike a B-2 bomber where they protrude slightly above the wing. The exhaust on the B-21 bomber looks different than the B-2 bomber, too, as the available renderings of the B-21 bomber show virtually no exhaust release. Are there new thermal management techniques enabling different, much stealthier heat dissipation? The more closely an aircraft and its exhaust mirror the surrounding temperature, the stealthier it is as thermal sensors are less likely to detect changes or differences in temperature.

A horizontal blended wing-body structure that has no protruding wings, fins, or vertical structures designed for vectoring is, by design, intended to optimize stealth performance. This means that electromagnetic radar “pings” will have fewer shapes, contours and edges to bounce off of and generate a return signal or rendering of an object. This is the advantage of flying the B-21 bomber, which is engineered to both elude lower-frequency surveillance radar as well as high-frequency “engagement” radar. The point is that even if a surveillance radar with a wider span were able to detect that “something” was in its airspace, it might lack the radar precision, speed, and tracking ability to “engage,” strike or destroy a moving target. Thus, there may not be a clear picture indicating that an aircraft is present, as a stealth bomber like the B-21 bomber is engineered to appear like a bird or even an insect to enemy radar, given its low signature.

Perhaps the B-21 bomber does incorporate a new generation of stealth technology, yet its lack of detectability may also be made possible or improved by a new generation of computing and long-range sensing. Should the B-21 bomber operate something similar to the B-2 bomber’s defensive management system, or perhaps even something superior to that, it might be able to operate with an ability to find, track, and therefore elude enemy radar systems. Former Air Force Acquisition Executive Dr. William Roper once published comments on computer sensing of the B-21 bomber. Without citing specifics, he voiced enthusiasm that the B-21 was being built with a new generation of sensing and high-speed computer processing such that it can complete the decision cycle or OODA-loop, much faster than potential adversaries. Perhaps there is a bomber equivalent to an F-35-jet-like sensor fusion wherein advanced, high-resolution long-range sensors are able to detect enemy targets before it can be detected. Thus, the B-21 bomber might be able to enter enemy airspace, attack, and leave without advanced Russian and Chinese air defenses detecting it.