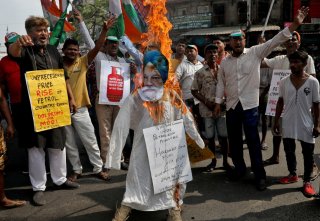 The government of the United Arab Emirates (UAE) became the most recent Muslim nation to voice its condemnation of two Indian lawmakers on Monday after the pair reportedly made comments disparaging the Prophet Muhammad. The comments ignited a firestorm of criticism from Arab and Muslim countries and prompted at least fifteen other nations to lodge official complaints with their countries’ Indian embassies.

Indian parliamentarians Nupur Sharma and Naveen Jindal, both members of the country’s ruling Bharatiya Janata Party (BJP), were separately accused of insulting the Islamic prophet over the weekend when it was revealed that Sharma had made derogatory remarks about him and his wife Aisha during a televised political debate last month and Jindal supported her with a now-deleted tweet.

The BJP’s leadership initially took no action against the lawmakers. However, following a chorus of protests from the Arab world, the party swiftly suspended Sharma, expelled Jindal, and issued a Hindi-language statement “denounc[ing] insult of any religious personalities.”

The UAE, historically a close ally of India, announced that the comments had been “contrary to moral and humanitarian values and principles,” according to the UAE’s state-run WAM news agency. The country’s foreign ministry, which issued the statement, emphasized a “need for respecting religious symbols” of all faiths.

The United Arab Emirates is the most recent country to condemn the remarks, after a wave of similar criticism from Pakistan, Kuwait, Qatar, and Saudi Arabia. In Qatar, which Indian vice president Venkaiah Naidu is currently visiting in an attempt to improve commercial ties, Foreign Minister Sultan bin Said al-Muraikhi insisted that New Delhi make “a public apology and immediate condemnation of these remarks.”

The BJP, which is perceived as a right-wing Hindu nationalist party competing against the more secular Indian National Congress, has long faced criticism for its treatment of India’s sizable Muslim minority. Prior to his election as India’s prime minister, Narendra Modi, a longtime BJP member, was banned from visiting the United States in 2005 over concerns that he had failed to prevent anti-Muslim riots in India’s western Gujarat province as its chief minister.