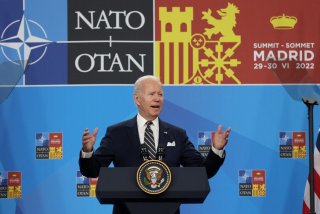 President Joe Biden announced on Thursday that the United States would commit an additional $800 million in military aid to Ukraine, raising the United States’ total commitment to the embattled Eastern European nation to $7 billion since the onset of Russia’s invasion in late February.

Speaking during the final day of NATO’s annual summit meeting in Madrid, Spain, Biden indicated that the aid package would include HIMARS rocket artillery and air defense systems, both of which the Ukrainian government has requested in recent weeks.

“The United States is rallying the world to stand with Ukraine,” he said.

During the NATO summit, the thirty-member military alliance agreed to a new Strategic Concept outlining the alliance’s grand strategy and priorities over the next decade. In marked contrast to the previous Strategic Concept, which sought “practical cooperation with Russia in areas of shared interests,” the new document labels Russia as “the most significant and direct threat to [NATO’s] security and to peace and stability in the Euro-Atlantic area.” It also includes references to the “systemic challenge” presented by China, which has pursued an increasingly active foreign policy in the Indo-Pacific region over the past decade.

In spite of rising challenges from abroad and domestic discontent within the United States, Biden vowed that Washington would continue to provide the backbone of NATO’s security.

“America is better positioned to lead the world than we ever have been,” Biden said. “I have not seen anyone come up to me … nor have you heard them say anything other than ‘Thank you for America’s leadership … You’ve changed the dynamic of NATO and the G7’,” referring to the Group of Seven, a bloc of seven major Western-aligned nations.

Biden had announced earlier in the summit that the United States would increase its troop presence in Europe, creating a new base in Poland and deploying additional forces to Romania.

The president also spoke favorably about the prospective entry of Sweden and Finland to NATO, which received a major boost earlier in the week after Turkey agreed to drop its opposition to the two Scandinavian countries’ accession to the alliance. Biden hinted that the United States might sell F-16 fighter jets to Turkey during the summit, although he added that such a deal would require Congressional approval and insisted that the fighters had not been offered as a quid pro quo for Swedish and Finnish NATO accession.

Biden briefly commented on his upcoming visit to the Middle East, where he is scheduled to travel to Saudi Arabia, a country he described as a “pariah” for its human rights record during his 2020 presidential campaign. The president claimed that the focus of the trip would be persuading U.S. allies in the Persian Gulf to increase oil production, but that other issues, such as Gulf nations’ normalization agreements with Israel, would also be discussed.