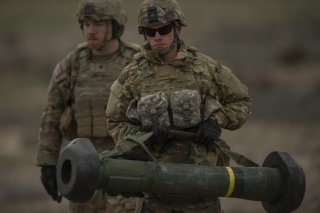 On Tuesday, President Joe Biden toured a Lockheed Martin factory in Alabama to commend the workers for producing the Javelin anti-tank missiles that are being shipped en masse to Ukraine’s armed forces.

“You’re allowing the Ukrainians to defend themselves, and, quite frankly, they’re making fools of the Russian military in many instances,” Biden said in remarks. “A big part of the reason they’ve been able to keep on fighting and to make this war a strategic failure for Russia is because the United States, together with our Allies and partners, have had their back,” Biden added.

But by funneling billions of dollars worth of weapons to Ukraine, the U.S. military is steadily depleting its own stocks of key man-portable systems, including Javelins and Stinger anti-aircraft missiles. "The United States military has probably sent about one-third of its Javelin anti-tank missiles to Ukraine — one-third of our supply given to them," said Sen. Richard Blumenthal (D-Conn) during a Senate Armed Services Committee hearing on the “health” of the U.S. defense industrial base. “I think we have lost the luxury of time here, the closet is bare,” Blumental added. “The decisions we make now will determine the outcome [of the war] because these weapons will not magically appear for us or our allies or Ukraine.”

Mark Cancian, a senior advisor at CSIS, noted to CNN that several of the previous packages of U.S. security assistance to Ukraine did not include further shipments of Javelins or Stingers, suggesting that the Pentagon does not want “to exhaust these inventories further.”

Defense Secretary Lloyd Austin has insisted that the unprecedented program of U.S. weapons transfers to Ukraine has not undermined overall U.S. military readiness. “We will never go below our minimum requirement for—for our stockpile, so we will always maintain that capability to—to defend this country and … support our interests,” said Austin.

But major defense industry players say it will take years for stockpiles of some missile systems to return to pre-war levels. Raytheon CEO Greg Hayes said in late April that the company may not be able to make new Stinger systems until at least 2023, citing chronic deficits in key electronics components.