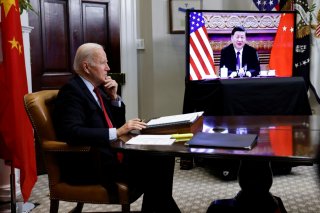 The meeting was arranged after tensions had escalated over the status of Taiwan, the democratically-run island that Beijing has claimed it intends to integrate into the mainland—by force if necessary—and Washington has hinted it might defend.

Within this context, Biden described the summit as conciliatory in nature, arguing that both countries had a moral imperative to ensure that tensions did not “veer into open conflict.” The Chinese foreign ministry agreed, with spokeswoman Hua Chunying describing it as “constructive and productive” and a step toward greater “mutual understanding.”

The meeting was widely perceived as cordial. Biden and Xi described each other as friends and noted that they had always been candid with one another and openly expressed their aims. The two leaders agreed that “common sense guardrails,” in Biden’s terminology, were needed to prevent conflict in the two superpowers’ relationship.

In spite of Biden and Xi’s friendliness, the overall trend of the U.S.-China relationship has been negative over the past decade. Successive U.S. presidents have criticized Beijing for unethical economic practices, territorial claims against Taiwan and other nations bordering the South China Sea, and repression of its Muslim Uyghur population in its western Xinjiang province. For its part, Beijing has described Washington’s support for Taipei as an attempt to meddle in China’s internal affairs and has accused the United States of officially maintaining the “One China” policy while quietly continuing to offer political and military support to Taiwan.

Biden obliquely referenced these tensions in the two leaders’ meeting, arguing that “all countries have to play by the same rules of the road,” which he said was “why the United States is always going to stand up for our interest and values and those of our allies and partners.” In October, several weeks before the meeting, the president had made an apparent gaffe in which he pledged that the U.S. would defend the island militarily in the event of a Chinese invasion; the White House later confirmed that its policy had not changed.

Biden and Xi’s last face-to-face meeting took place in Washington, DC in 2015, during Biden’s tenure as Vice President in the Obama administration. However, it is the third time the two leaders have spoken since Biden’s inauguration.