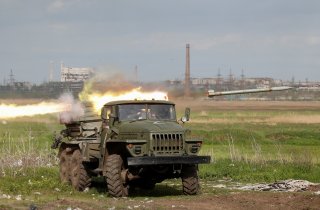 This emerging effort, as explained by Undersecretary of Defense for Policy Colin Kahl, will involve the United States working with the defense industry to manufacture and send new weapons to Ukraine in support of a long-term fight. Kahl was clear that this initiative, outlined as part of Biden’s most recent $2.98 billion support package, is intended to sustain and empower Ukrainian forces long enough to match and even outlast the Russian invaders. According to Kahl, the long-term aid initiative is intended to send a message to the Kremlin that Russia will not be able to “outlast” Ukrainian defenses and use time as a weapon of war, hoping to ultimately erode Ukraine’s ability to defend and fight. Kahl was clear that NATO and the West will simply not allow that to happen.

The delivery of the NASMS represents the latest development in an ongoing effort to supply air defenses to Ukraine, senior Pentagon officials said. The support effort is drawing upon the U.S. military’s ability to fast-track and accelerate production.

"Acquisition speed and agility is a top priority," Douglas R. Bush, the Army's assistant secretary for acquisition, logistics, and technology, said in a Pentagon briefing. "The rapid award of this contract is another example of the Army's ability to accelerate the delivery of critical capabilities through our industry partners to our allies.”

Warzone destruction statistics from the Ukrainian Ministry of Defense lend evidence in support of recent Pentagon reports that air-defense systems provided by the United States and its allies are having a massive impact on the battlefield. A September 2 Ukrainian war update reports that Ukrainian forces have destroyed 234 aircraft, 205 helicopters, and as many as 853 drones. This may help explain why Russia has not been able to achieve air superiority. Moreover, the fact that Ukraine has already shot down 235 Russian aircraft is quite telling, and it may help explain why, early on in the war, Pentagon observers said Russian fighters were “risk averse” and reluctant to fly into areas over Ukrainian air defenses. As Global Firepower reports that Russia operates 772 fighter jets, Ukraine may have already taken out much of Russia’s arsenal of fighters.