Big-Motor Bombers. The U.S. Air Force Has Mulled B-52 Re-Engining Since the 1950s 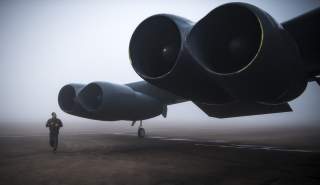 The U.S. Air Force in early 2020 expects to formally request proposals from industry for replacing the engines on the flying branch’s 76 B-52 bombers.

The request for proposals could lead to a multi-billion-dollar program to swap out the 1960s-vintage B-52’s eight Pratt & Whitney TF-33 engines with more-efficient modern motors that could reduce the bomber’s per-hour flying cost and extend its range and payload.

On the eve of the RFP, the Air Force has released concept art depicting previous proposals for re-engining the B-52. The older proposals date back to the 1950s and serve as a reminder that, for nearly the entirety of its long service life, the B-52 has been a candidate for new motors.

“The first production B-52A first flew on Aug. 5, 1954, with the first in-service B-52Bs following a short time later,” the Air Force noted in its retrospective. “Despite being powered by eight Pratt & Whitney J-57 engines, the bomber felt underpowered from the start. Even with water-injection added for additional thrust at take-off, the aircraft suffered from marginal performance with a full weapons load on a hot day.”

In early 1956, Maj. Gen.l Al Boyd, the deputy commander of Systems, Air Research & Development Command, asked industry to consider replacing a pair of J-57s on each wing with a single afterburning J75 engine in order to boost performance.

“The prototype XB-52 was made available and the aircraft made a series of flights in this configuration between November 1957 and August 1958, logging over 140 flight hours,” the Air Force noted. “Despite the final report stating a ‘substantial performance improvement’, the configuration was not adopted for the fleet.”

The Air Force still wasn’t happy. “Another attempt to find new engines came in 1969 when Boeing began a study to re-engine the B-52 fleet and again in August 1971 when the Air Force and Boeing performed a more detailed study on replacing the engines with High Bypass Ratio Turbofan engines on all B-52G & H models,” the service explained.

“Boeing studied a concept using a single turbofan on each of the four wing pylons and another that used two engines on a single inboard pylon. During 1975, with the highly-contested Rockwell B-1 program in full swing, members of Congress offered a re-engined and upgraded ‘B-52I’ as a replacement. Again, it was not adopted.”

But a new engine again became a viable option following an incident in 1996 during which a B-52 suffered a double engine failure, causing engines numbers three and four to fall off the bomber. “In this case, Boeing and Rolls-Royce teamed up and proposed the use of the Rolls- Royce RB211-535, similar to those used on the commercial 757 aircraft,” the Air Force recalled. “The Air Force once again rejected the proposal.”

The rising cost of maintaining the aging TF-33s finally forced the issue. By 2003, the cost of overhauling the old TF-33 engines had tripled,” the Air Force noted.

In the 2010s the 60-strong B-1 force experienced declining readiness rates owing to hard use over Afghanistan and Iraq. The B-2 fleet meanwhile shrank to just 20 airframes following a 2008 crash on Guam. The Air Force in 2018 decided to retire the B-1s and B-2s in the 2030s and build its long-term bomber fleet around new B-21 stealth bombers and upgraded B-52s.

Re-engining finally gained traction. “The goal is 20- to 30-percent better fuel efficiency with a 40-percent increase in range, ease of maintenance utilizing the latest onboard diagnostic equipment and lower greenhouse gas emissions,” the Air Force stated.

Pratt & Whitney, Rolls-Royce and General Electric all plan to submit proposals. Combined with a wide range of other B-52 upgrades and life-extension efforts, the multi-year contract for more than 600 replacement engines could cost around $32 billion.

The Air Force has mulled giving the re-engined B-52H a new designation. The B-52J.