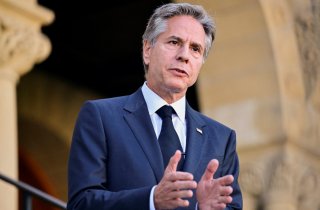 Secretary of State Antony Blinken claimed on Monday that China was speeding up its plans to capture Taiwan by military force—prompting an angry response from China’s foreign ministry, which accused him of implicitly interfering in Chinese internal affairs and violating long-standing American commitments to Beijing.

“There has been a change in the approach from Beijing toward Taiwan in recent years,” Blinken said during an event at Stanford University alongside former secretary of state Condoleezza Rice and former secretary of defense James Mattis. “Instead of sticking with the status quo that was established in a positive way, [there was] a fundamental decision that the status quo was no longer acceptable, and that Beijing was determined to pursue reunification on a much faster timeline.”

Blinken did not elaborate on the timeline for reunification but suggested that the Chinese government was increasingly preparing to gain control of the island through coercion or military force rather than diplomacy, a prospect that he claimed was “creating tremendous tensions” between Beijing, Taipei, and Washington.

On Tuesday, Chinese foreign ministry spokesman Wang Wenbin condemned Blinken’s remarks, suggesting during a press briefing that they implied a U.S. violation of the One China policy, an explicit declaration that Taiwan is not independent from China that he noted had been reaffirmed in three separate joint communiques between the two countries.

Although it does not have formal diplomatic relations with Taiwan, the United States has maintained a de facto embassy in Taipei and has sent a series of representatives to the island, to Beijing’s increasing anger. Wang suggested in his remarks that the United States had “broken its word” by continuing to sell arms to the Taiwanese military and allowing Speaker of the House Nancy Pelosi to visit the island in August, making her the highest-ranking official to travel to Taipei since 1997.

Wang did not disavow Blinken’s main argument, offering no clarification on the Chinese government’s timeline with respect to Taiwan. However, he emphasized that Beijing would continue to prioritize a peaceful unification between the two sides, claiming that it “best serve[d] the interests of the Chinese nation as a whole [and] the long-term stability and development of China.”

Wang’s remarks come several days after Chinese leader Xi Jinping proclaimed at the Chinese Communist Party’s 20th Party Congress that his government would substantially strengthen the military within five years. In the same speech, Xi emphasized that Beijing would never renounce the use of force to gain control over Taiwan. At the party conference, Xi is expected to be nominated for a third five-year term as China’s leader, potentially making him the longest-serving head of state since Mao Zedong.