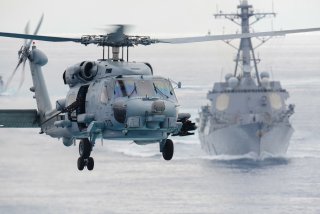 Ships and sailors from twenty-one countries began this year’s Southeast Asia Cooperation and Training (SEACAT) exercise in Singapore on August 16.

The exercise, “designed to enhance cooperation among Southeast Asian countries and provide mutual support and a common goal to address crises, contingencies, and illegal activities in the maritime domain using standardized tactics, techniques, and procedures,” returns to an in-person exercise after being an at-sea only exercise the previous two years due to the Covid-19 pandemic.

“The COVID-19 pandemic introduced many unique challenges that required creativity and flexibility in maintaining our operational readiness, as well as our linkages with allies and partners. As we transition into a post-pandemic reality, I look forward to more face-to-face meetings.”

SEACAT comes on the heels of a flurry of American-led maritime exercises with other partner nations in the Indo-Pacific region. The world’s largest maritime exercise, Rim of the Pacific (RIMPAC), recently concluded. The U.S. Navy led the biennial exercise and this year’s iteration brought twenty-six Pacific countries together to practice a variety of naval warfare techniques.

Another exercise in the Indo-Pacific is Pacific Dragon 2022, the venue for what U.S. Indo-Pacific Command explained is an opportunity to “improve tactical and technical coordination and interoperability concerning regional air and missile defense capability” between participating navies.

Missile defense is an especially critical capability to improve for the Indo-Pacific, as militaries may try to conquer the region’s extreme distances via long-range missile barrages rather than typical naval means. SEACAT differs from both RIMPAC and Pacific Dragon by focusing on visit, board, search, and seizure (VBSS) exercises rather than warfare at sea against a peer rival.

“The maritime domain is the lifeblood of the global economy and must remain free and open to function properly,” Vice Admiral Thomas said in the U.S. Navy’s statement. “Our respective governments have all independently decided that it is also within our national interests to uphold the international norms that govern the maritime domain, and which are applied without prejudice for the benefit of every nation.”

While SEACAT, RIMPAC, and Pacific Dragon are regularly-scheduled maritime exercises, they’ve taken new importance in recent years. The main driver behind their new prominence is China’s escalating rhetoric and clear desire to seize Taiwan by force, a move that could set off a significant regional war.

Given the dangers, it is little wonder more Pacific nations are signing up for the United States Navy’s exercises than ever.