Round Two: Navy Kicks Off Missile Defense Exercise After RIMPAC 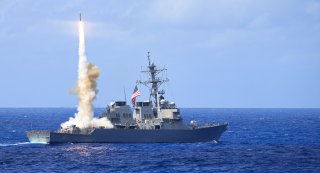 Though the U.S. Navy-led Rim of the Pacific exercise has concluded, practicing defense techniques is still at the forefront of some Pacific nations’ defense priorities in the Pacific Dragon 2022 exercises.

Pacific Dragon is a biennial exercise focused on improving defensive capabilities. U.S. Indo-Pacific Command explained that Pacific Dragon is “designed to improve tactical and technical coordination and interoperability concerning regional air and missile defense capability,” according to a statement.

Pacific Dragon comes on the heels of Rim of the Pacific, a multinational naval exercise that is also the largest of its kind in the world. Though the exercise has occurred every two years since the 1970s, recent iterations have become much more significant due to threat perceptions by Pacific nations.

Particularly concerning is China’s rhetoric—and increasingly Beijing’s actions—toward its neighbors. With the flames of war in Ukraine still raging, many countries in the Pacific are fearful of the specter of conflict in their region.

While the United States leads a number of multinational exercises in the Pacific each year, those exercises have increased in both size and number of participants as of late. This year’s Rim of the Pacific exercise, for example, included twenty-six different countries for the first time—and it is clear why.

Russia’s invasion of Ukraine showed definitively that the rules-based international order of the last eight decades can no longer be counted on to maintain peace and stability. Combined with China’s rhetoric over Taiwan and clear desire to take back the island democracy by force, it is better to be a safe Pacific nation than a sorry one.