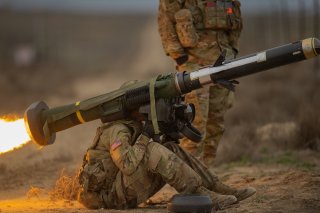 The Defense Security Cooperation Agency announced the purchase, and the announcement from the agency explained that:

The State Department has made a determination approving a possible Foreign Military Sale to the Government of the United Kingdom of Javelin Lightweight Command Launch Units (LWCLUs) for an estimated cost of $300 million. The Defense Security Cooperation Agency delivered the required certification notifying Congress of this possible sale today.

Though the Javelin is a potent anti-tank missile with a range of about 2,500 meters or 1.6 miles, it is rather heavy and is just about at the upper limit of what an individual soldier can carry on foot.

The Lightweight Command Launch Unit is 40 percent to 50 percent lighter than the standard launch unit and, thanks to improved optics, offers a much greater 4,000-meter or 2.5-mile range.

Information provided by Raytheon, one of the Javelin’s two manufacturers, explains that the Javelin “provides the U.S. Army, U.S. Marine Corps and numerous international customers with a medium-range, ‘fire-and-forget’ missile for use against a wide array of targets including armored vehicles, bunkers and caves. The system’s Command Launch Unit, or sight, performs surveillance, allowing a gunner to see targets.”

In addition, the Javelin “can be deployed from multiple platforms and used during the day, at night and in any kind of weather. The program has also demonstrated that Javelin can be fired from a remote launcher mounted on an unmanned ground vehicle,” which gives it nearly a half-mile additional range.

Raytheon also explains that the Javelin “has been used in Afghanistan and Iraq in more than 5,000 engagements,” and that the missile “is scheduled to be in inventory until 2050.”