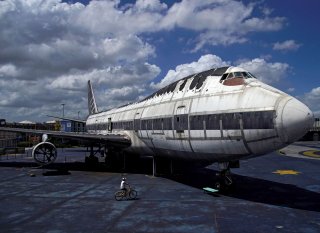 Boeing’s iconic 747 passenger jet was once known as the “Queen of the Skies.” One of the most impressive planes ever built, the entire line is now being retired.

Bloomberg reported the production wind-down earlier this month and explained that since 2016, Boeing has lost $40 million on every 747 manufactured. Although not yet publicly disclosed, Boeing will halt 747 production due to declining orders, bringing the over fifty-year production run to an end sometime in the next couple of years.

The iconic double-decker 747 made its flight debut in 1970, when the passenger variant was advertised as a luxurious way to sail the skies. At the time, the plane featured bars, lounges, and other amenities not available to today’s cattle-car riders. Where the 747 passenger plane was fancy, the 747 freighter was capable. Its upward-rotating nose allowed heavy and bulky items to be loaded with ease. The 747 quickly became one of Boeing’s most-produced jet airliners.

Though the 747 can haul around cargo and passengers with relative ease, trends in the airline industry have been working against it. The 747’s four-engine design is powerful but loses out to two-engine designs that are much more fuel-efficient—and, therefore, more profitable. In an industry with hair-thin profit margins, the 747 just couldn’t compete.

In recent years, Boeing has had to deal with a number of other controversial—and sometimes scandalous—events that have hindered the company’s profitability. The roll-out of Boeing’s 787 Dreamliner, a newer model designed to be highly efficient through extensive use of composite materials and a new wing, body, and engine design, was hampered by production quality issues, which cut into the program’s reliability and profitability.

On top of that, the 737 MAX scandal has cost Boeing quite a bit of change in terms of recertification and new software design. Sales of the jet airliners have fallen following the string of deadly crashes the planes were involved in, further harming Boeing’s profitability.

Boeing isn’t the only airplane manufacturer suffering. Airbus’ A380, really the only other wide-body jet airliner that could be considered a competitor to Boeing’s 747, is also slated to end production sometime next year. The move was prompted in part by the United Arab Emirate’s flagship, Emirates Airlines, cutting their A380 order by a whopping thirty-nine airframes.

To top it all off, the coronavirus pandemic and the global economic downturn have slowed air travel, and therefore the manufacture of jet airliners, which may have hastened the 747’s demise.

Still, the 747s currently in existence have many more years of flight hours left in their wings and will likely fly for quite a bit of time to come—although their days are numbered, we haven’t seen the last of the iconic wide-body jet airliner.