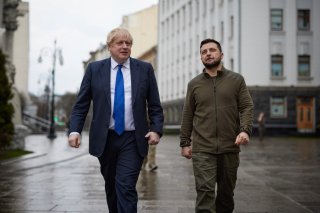 During a 2016 speech laying out the pillars of the United Kingdom’s post-Brexit foreign policy, then-Foreign Secretary Boris Johnson articulated an approach to international relations infused with globalist rhetoric. “We are a protagonist – a global Britain running a truly global foreign policy”, Johnson said, while calling for more “free trade” agreements and strengthening and reforming the “rules-based international order.” As prime minister, Johnson then issued the Integrated Review 2021, “Global Britain in a Competitive Age,” which outlined a hard power strategy and investments for a period of “systemic competition” among middle and great powers. One commentator noted in response that “the ambitions of ‘Global Britain’ have delivered a bargain-basement version of American grand strategy.” This is the grand strategy that has set the United Kingdom’s course in Ukraine and one that British foreign secretary Liz Truss, who is likely to be Britain’s next prime minister, will surely carry out.

As a top member of Johnson’s cabinet, Truss has had a leading role in shaping British policy toward the Russo-Ukrainian War. On this score, Truss’ diplomatic performance has been unremarkable and, at one point, even counterproductive. In line with her boss’ internationalist convictions, Truss believes her country is better off when it plays the role of deputy sheriff to help the United States police the world. For instance, Truss declared in a March speech at the Atlantic Council that “Our ultimate aim … [is] to make the world safe for freedom and democracy.”

Like Washington, London views the war in Ukraine as an opportunity to bleed Russia dry and weaken a great power rival. However, there are also credible reasons to suspect that the United Kingdom has been more dangerously forward-leaning in its support for Ukraine than most members of the transatlantic anti-Russia coalition.

Citing Ukrainian military commanders, an April 15 report in The Times noted that “British special forces have trained local troops in Kyiv for the first time since the war with Russia began.” Four months later, the Washington Examiner’s Tom Rogan, using information gleaned from “three Western government sources,” described in detail how British special forces, supervised by MI6, were at points operating “very close to the front lines” to help Ukrainian forces conduct “deep battlespace” strikes behind Russian lines to degrade command nodes, logistics trains, and supply depots. While Rogan added that British advisors were not authorized to directly engage Russian forces and that other Western paramilitary units (including CIA elements) are also on the ground in Ukraine, his previous reporting has highlighted how the Johnson government’s risk appetite in Ukraine, and Truss’ willingness to expand the envelope of support, is higher than the Biden administration’s.

Whether this serves the interests of the United Kingdom is up to the British people to decide. Yet British activism in Ukraine risks undermining the Biden administration’s stated policy that it will not intervene directly—a declaration that was meant to restrain the belligerency of certain NATO members as much as it was a signal to Moscow that U.S. forces organizing in Eastern Europe were not preparing to enter an active war zone. Biden’s commitment to avoid a direct confrontation with Russia eventually became the baseline strategic imperative of transatlantic action as NATO members developed their policies of support toward Ukraine.

But if policymakers in Washington are going to address the fact that a close NATO ally is too eager to escalate Western involvement in the Russo-Ukrainian War just short of an overt armed intervention, some introspection is in order. British involvement in Ukraine might exceed the outer limits of the United States’ risk tolerance, but not by much. Remember that intelligence shared by U.S. officials helped Ukrainian forces sink the Moskva, the guided missile cruiser and flagship of the Russian Black Sea Fleet, using two Neptune anti-ship missiles. More alarmingly, the New York Times reported in May that U.S. intelligence enabled Ukrainian forces to target and kill Russian generals leading troops from the front lines. In both instances, the United States identified specific high-value Russian assets while Ukrainians executed the strike. Viewed in these terms, Russia’s claim that the West is waging a proxy war against it in Ukraine is hard to dispute.

Given the depth of the United Kingdom’s involvement on the ground, it would be imprudent to assume that British military operators can avoid direct contact with Russian forces indefinitely, or that Moscow will not begin to target Western special forces units directing strikes against its troops in Ukraine. When a new prime minister takes office, Washington, London, and any NATO allies with special forces in Ukraine need to develop a joint transition plan that will equip Ukrainian troops to conduct these missions without the direct aid of Western military operators, who should promptly begin leaving the country. More importantly, diplomatic channels with Moscow, both bilaterally and through NATO directly, should be reopened to begin probing for the possibility of a ceasefire.

During her intra-party campaign for prime minister, Truss has not shown any inclination to de-escalate her country’s involvement in Ukraine. But if she is elected as prime minister, U.S. policymakers would do well to discourage any further British involvement on the ground and urge a pullback from the front lines in Ukraine. Along with reassessing U.S. exposure in Ukraine, it would be sensible for the White House to level with its “closest ally” across the Atlantic and make explicit that the West’s first priority is to avoid, as Biden once bluntly stated, “World War III.”