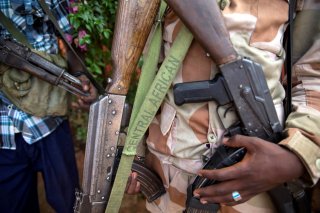 President Faustin-Archange Touadera of the Central African Republic (CAR) declared on Friday that the government would begin a ceasefire against armed rebel groups in the country, urging the rebels to reciprocate and enter into negotiations.

While the exact conditions of the ceasefire were not made public, it appears most likely that the government will cease offensive actions against the rebels, but will defend itself if they initiate further clashes. Touadera explained his decision on television, claiming that an end to violence would allow Central Africans to access services and humanitarian aid, the delivery of which has been complicated by the ongoing violence.

The president announced that the ceasefire would go into effect on Friday at midnight and called on the country’s rebels to obey it as well. Although the rebels are a series of disparate groups and do not have a formalized command structure, the Coalition of Patriots for Change (CPC), one of the largest opposition groups, announced that it approved of the ceasefire and would participate in it.

While other ceasefires have taken place in the country before, they have usually fallen apart quickly after one side violated them. It remains to be seen whether the current ceasefire will be more enduring, although the CPC’s commitment is a promising sign.

The Central African Republic has experienced several rounds of conflict since 2013 when then-President Francois Bozize was deposed by the Muslim Seleka rebel group. Although the new government promised stability, the violence continued to escalate, leading the new president, Michel Djotodia, to resign the following year. As of 2021, around one-fourth of the CAR’s population remains displaced, and rebel groups, including both the CPC and former Seleka branches, continue to control territory in the country’s north and east. The latest round of violence was initiated after Bozize was barred from contesting the country’s 2020-2021 election, leading his supporters to take up arms.

Touadera has been president since 2016 when he won an election largely considered to be free and fair, although the runner-up alleged fraud. He was re-elected in the 2020-2021 election that Bozize was barred from, defeating former Prime Minister Anicet-Georges Dologuele with fifty-four percent of the vote, although voting was inaccessible in most parts of the country outside the capital due to violence.

The government has largely blamed the CPC, loyal to Bozize, for the increase in violence.