China’s Getting a New Aircraft Carrier Plane. But Don't Get Too Excited. 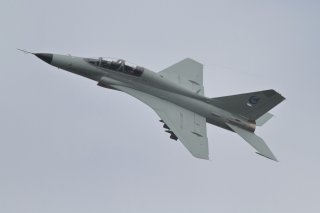 The Chinese navy is getting close to fielding a new carrier-compatible warplane.

But the new version of the single-engine JL-9 primarily is a trainer, not a front-line fighter. While the naval JL-9 could help China to train more aviators for its growing fleet of flattops, it probably won’t do much to boost the combat capabilities of the carriers’ embarked air wings.

The prototype of the naval JL-9 on April 19, 2020, rolled out of Guizhou Aviation Industry Corporation’s factory. A few days later the diminutive trainer was ready for its first flight.

Guizhou reportedly removed the drag-parachute from the basic JL-9 in order to make it carrier-compatible. All conventionally-landing carrier planes also require a tail hook for making arrested landings on carrier decks. Naval planes also tend to have tougher landing gear than do their strictly land-based counterparts.

The land-based JL-9, a derivative of a Chinese MiG-21 clone, is in service in small numbers with the Sudanese air force as well as with the Chinese air force and navy. Guizhou reportedly tried a few years ago to develop a carrier version of the JL-9 but the variant proved unsuitable. The current naval JL-9 apparently represents the company’s second attempt to place the trainer on carrier decks.

The need is clear. “China does not have an aircraft carrier-based trainer jet to train fighter pilots and have to first train them on a land-based trainer, then switch directly to the actual J-15 fighter jet,” Global Times explained.

First carrier Liaoning is a rebuilt former-Ukrainian vessel. Shandong, the second carrier, is a somewhat improved copy of Liaoning.

Shandong boasts roomier hangars and as such reportedly can embark up to 36 fixed-wing fighters, as opposed to the 24 that fit aboard Liaoning.

But both vessels suffer crippling limitations that could prevent them from ever playing a meaningful role in a major conflict.

It all comes down to a few simple facts. The J-15, China’s only front-line carrier-launched fighter, is a copy of the Soviet Su-33. That means it’s heavy. In fact, at 19 tons empty, it’s the heaviest fixed-wing carrier plane currently in service anywhere in the world. The U.S. Navy’s own F/A-18E/F Super Hornet fighter weighs just 16 tons empty.

The J-15’s weight might not be a major issue if Chinese carriers featured catapults like American carriers do. But they don’t. Instead, both Liaoning and Shandong launch their planes via a bow-mounted ramp. The ramp launch method imparts much less energy that catapult-launch can do, meaning the Chinese carriers planes must keep down their loaded weight.

The Washington, D.C. Center for Strategic and International Studies estimated the J-15’s maximum takeoff weight during carrier operations to be around 31 tons. America’s 10 nuclear-powered supercarriers with their catapults can launch planes weighing up to 50 tons.

Even if the Chinese fleet leverages the naval JL-9 to train more pilots, these pilots would fly into battle in under-armed planes.

Instead of speeding ahead with the development of a six-carrier fleet -- two each for the northern, eastern and southern fleets -- the Chinese navy recently signalled it might stop after acquiring flattop number four.

“Plans for a fifth [carrier] have been put on hold for now, according to military insiders,” the Hong Kong South China Morning Post reported. “They said that technical challenges and high costs had put the brakes on the program.”