Is China’s H-20 Bomber a Copy of the Air Force’s Crown Jewel? 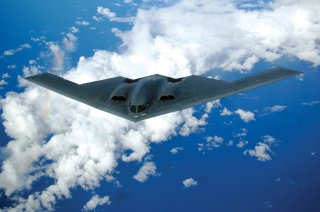 Although much is still not known about China’s new H-20 stealth bomber platform, its existence was cited in the Pentagon’s 2018 and 2019 “China Military Power” reports. The 2019 report specifies that the new H-20 will likely have a range of “at least 8,500km” and “employ both conventional and nuclear weaponry.”

The report cites 2016 remarks from People’s Liberation Army Air Force Commander Gen. Ma Xiaotian saying that the H-20 could emerge some time in the next decades. Well, sure enough, the next decade is here, and early progress appears to parallel some of Xiaotian’s comments about Chinese intentions for the bomber. According to the Pentagon’s China report, he claimed that the H-20 will “employ 5th generation technologies.”

It remains to be seen whether China can engineer and deliver fifth-generation systems for a bomber, but the Chinese have already engineered several potentially fifth-generation aircraft—the J-20 and J-31 fighters. At the very least, the exterior of the H-20 does look stealthy; it appears to have an embedded engine, a blended wing body, and a lack of vertical structures and engine air ducts woven into the frame underneath the fuselage. The U.S. B-2 bomber, by contrast, has air ducts emerging from the top of the fuselage. However, many other design features unequivocally seem to resemble features from the B-2. The Pentagon report observes that “a possible H-20 prototype depicted a flying wing airframe akin to the B-2 bomber and X-47B stealth unmanned combat aerial vehicle.”

The H-20’s reported range of 8,500 kilometers is slightly less than the B-2 bomber’s range of more than 10,000 kilometers, but Pentagon reports have raised concerns that the Chinese “may also be developing a refuelable bomber that could “reach initial operating capability before the long-range bomber.”

Perhaps of even greater concern, the Pentagon assessment states that such a refueler could “expand long-range offensive bomber capability beyond the second island chain.” A refueler could also substantially change the equation and enable it to rival the mission scope of a B-2, which successfully completed forty-four-hour missions from Whiteman Air Force Base in Missouri to Diego Garcia, a small island off the Indian Ocean, during Operation Enduring Freedom in Afghanistan.