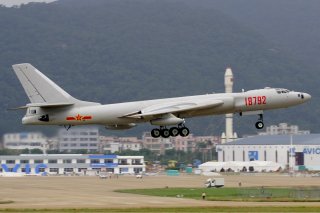 In a photo posted recently to Twitter, several H-6Js—a long-range strategic bomber in service with the People’s Liberation Army Navy—was seen on Woody Island. Though administered by China, the island, the largest of the Paracel Islands, is also claimed by both Taiwan and Vietnam. Here’s why that matters.

Like many pieces of the People’s Liberation Army Air Force hardware, the H-6 and its variants are based on older Soviet platforms. In the case of the H-6, the parent platform was the Tupolev Tu-16. The Soviet Union had initially sent several Tu-16s to China in the mid-1950s, and indigenous license-production of the aircraft began shortly thereafter.

China purportedly operates roughly 150 H-6 airframes and variants. Though there are slight differences throughout the fleet, the H-6 is one of China’s longer-range strategic bombers, capable of dropping both conventional and nuclear munitions.

A key component of China’s militarization of islands, reefs, and atolls in the South China Sea is runways—long runways. Other open source images recently seen online seem to indicate that several H-6J bombers landed recently on Woody Island, one of the remote strips of land that now hosts a Chinese outpost. (It should be noted that while a number of small islands in the South China Sea do host Chinese outposts that does not make them legally Chinese islands.)

This H-6 variant, one of the later models built specifically for the People’s Liberation Army Navy, boasts greater range and payload capabilities than its predecessors. It likely entered service in or around 2018. Though the H-6J’s improved performance is noteworthy, what is perhaps more worthy of mention is the bomber’s payload.

Perhaps the platform’s most potent missile is the YJ-12 anti-ship missile. The high-performance missile travels in excess of Mach 3 when launched from higher altitudes and is seen as one of China’s aircraft carrier-killers. The sea-skimming missiles could overwhelm American carrier strike groups if launched en masse. Given their high speed, a carrier group would have a very short window of opportunity to engage and take down the missiles before it would be too late to do so.

China’s reason for expansion south and east into the South China Sea—one of the world’s busiest and most important conduits for maritime shipping, not to mention an area rich in mineral and energy wealth—rests on being able to deny adversaries like the United States access to the region. Basing H-6 bombers in the region is a strong deterrent message, especially when the long-range strategic bombers are equipped with the YJ-12 anti-ship missile. It’s part of a larger trend of military exercises and preparation for conflict that China is taking seriously. Enemies beware.