Russia Built This Bomber (And It Now Flies For China) 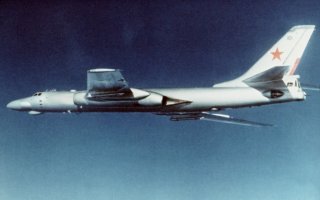 This Soviet-designed heavy bomber is still in Service with China’s PLA Air Force—nearly 70 years after its first flight.

In the aftermath of the Second World War, the Soviet Union was strapped for bombers. The most prominent member of the USSR’s bomber arsenal was a turboprop bomber, the Tu-4. The “Bull” as it was known, was a reverse-engineered copy, based on B-29 airframes that had crashed-landed on Soviet territory during the war.

Though the Soviet Union was officially neutral in the Pacific Theater until after the bombing of Hiroshima and Nagasaki, they rebuffed American requests to return the downed planes. These downed American airframes were used to create the backbone of the Soviet Air Force.

The venerable Tupolev Design Bureau, responsible for virtually all of the Soviet Union and Russia’s successful bomber designs, took advantage of early advancements made in jet design in the late 1940s and early 1950s.

In contrast to Tupolev’s B-29 copy, the Tu-16 had large swept wings, an aerodynamic advantage at higher speeds. It also could carry more ordinance than the Tu-4—including the very large FAB-9000, a 9,000 kilogram, or nearly 20,000 pound, free-falling bomb. The FAB-9000 was so large, the Tu-16 could only carry one at a time.

The Tu-16 was also one of only two bombers to carry the very odd-looking KS-1 Komet anti-ship missile. The KS-1 had wings and a tail and looked very similar (and preformed similarly) to the MiG-15. Additionally, the Tu-16 had a porcupine-like arrangement of 23 millimeter defensive cannons on the nose, rear, and sides of the fuselage.

Two large jet engines were integrated inside the wing roots, near the fuselage body. Tupolev even placed the design in the civilian market, where—in the Aeroflot fleet it—was named the Tupolev Tu-104.

Though the Tu-16 has long since been retired from Russian service, new life was breathed into the airframe by China. In the late 1950s, China bought licensing rights from the Soviet Union to domestically produce the Tu-16. The Chinese version is dubbed Xian H-6, and like its parent frame has a number of defensive automatic cannons on the rear and sides.

In 2007, China revealed the H-6K, a heavily updated Xian H-6 variant. The update included a new nose cone to house a more powerful radar, composite materials for parts of the airframe, and improved Russian engines that increase thrust and range. It also foregoes the 23 millimeter cannons, which would likely be next to useless against 4th and 5th generation fighters.

The heavily modified H-6K is likely to serve as China’s heavy strategic bomber for a long time to come, a testament to the utility of the original Tu-16 design—which is nearly 70 years old. Not bad for the Soviet Union’s first-ever jet bomber.