China: Anyone Blocking Taiwan Reunification Will Be ‘Crushed’ 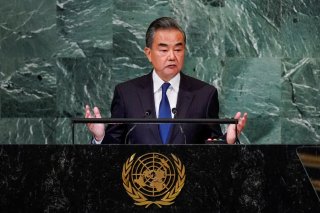 China on Saturday doubled down on its claim on Taiwan, warning that any country that gets in the way of its determination to reunify with the self-governing island would be “crushed by the wheels of history,” the Associated Press reported.

“Only when China is fully reunified can there be true peace across the Taiwan Strait,” Wang Yi, China’s foreign minister, told world leaders at the United Nations General Assembly, adding that Beijing would “take the most forceful steps to oppose external interference.”

“The PRC [People’s Republic of China] government is the sole government representing all of China,” he continued. “The One China principle has become a basic norm in international relations. Any move to obstruct China’s reunification is bound to be crushed by the wheels of history.”

The One China policy dictates that the United States recognizes the government in Beijing while allowing for informal relations and defense ties with Taipei. China regularly and vehemently defends its claim to Taiwan, which separated from the mainland after a 1949 civil war and now functions with its own government. Beijing claims the island nation as its own territory and has not ruled out retaking the island by force if necessary.

Wang’s address came nearly a week after President Joe Biden confirmed that U.S forces would defend Taiwan in the event of an attack by China.

“We agree with what we signed onto a long time ago,” Biden said during a CBS News’ 60 Minutes interview.

“And that there’s One China policy, and Taiwan makes their own judgments about their independence. We are not moving—we’re not encouraging their being independent. We’re not— that—that’s their decision,” he added.

When asked if the U.S. military would directly take part in defending the island nation, Biden replied: “Yes, if in fact there was an unprecedented attack,” noting that “U.S. men and women” would be involved in such an effort.

Earlier this month, tensions ratcheted up after the State Department announced a $1.1 billion arms sale to Taiwan.

“This package was in the works for some time precisely because we expected it would be needed as China increased its pressure on Taiwan,” State Department spokesperson Vedant Patel said regarding the sale. “We have and we will continue to be responsible, steady, and resolute and keep our lines of communication open with Beijing, but also continue to support Taiwan … in ways that are consistent with our policy.”

Chinese Embassy spokesperson Liu Pengyu responded in a series of tweets that the arms deal “sends wrong signals to ’Taiwan independence’ separatist forces, and severely jeopardizes China-US relations and peace and stability across the Taiwan Strait. China is firmly opposed to this.”