How U.S. Airpower Could Thwart a Chinese Attack on Taiwan 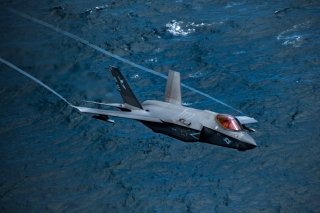 Any Chinese maritime buildup for an amphibious attack on Taiwan would most likely be seen by U.S. and allied surveillance systems. Yet given the size and lethality of China’s fast-growing navy, such a prospect clearly poses a major threat to Taiwan, the United States, and U.S. allies in the Pacific.

Such a contingency—particularly in light of China’s emerging fleet of quasi-stealthy Type 055 destroyers, Type 075 amphibious vessels, and operational aircraft carriers—might seem extremely difficult to defend. Could it be stopped?

A threat of this nature is quite likely the reason why the U.S. Navy continues joint patrols and training exercises such as dual-carrier operations, as the key to thwarting any Chinese advance on Taiwan would not only require the forward presence of surface warships but also U.S. undersea and air superiority. Of course, U.S. Navy Virginia-class attack submarines—which are increasingly stealthy, armed with torpedoes, and capable of clandestine intelligence, surveillance, and reconnaissance (ISR) missions near enemy islands and coasts—would be in an optimal position to detect and attack Chinese boats approaching Taiwan.

Yet another U.S. and allied advantage would come from the air, given that the United States now operates hundreds of F-35 fighter jets and regularly carries out “forward patrols” and deterrence missions in the Pacific. Simply put, should U.S. and allied fifth-generation air power be in a position to respond fast enough, they could be able to quickly establish air superiority over the Taiwan Strait. Air superiority could prove decisive and, along with submarines, offer the best window of hope for U.S. Navy forces to destroy approaching Chinese forces.

China operates a small number of fifth-generation J-20 stealth aircraft, but they must deploy from land and are not maritime-capable or able to operate closer in on the seas. While the Chinese are also developing a new carrier-launched J-31 aircraft, the program is in its infancy. Also, perhaps of greatest significance, China does not have a vertical-take-off-and-landing fifth-generation aircraft like the Marine Corps’ F-35B and would therefore be challenged to operate forward with impactful numbers in maritime warfare. Any Chinese amphibious assault on Taiwan would struggle without an air threat or air supremacy, which Beijing would most likely be unable to achieve given the numbers and proximity of U.S. and allied F-35 fighters.

America-class amphibious assault ships can, for example, deploy with up to fifteen F-35Bs on board, which, if complemented by impactful numbers of carrier-launched F-35C fighters, could allow the United States to quickly establish air superiority. Why? Well, even if a J-20 or J-31 were in any way comparable to the U.S. equivalents, and there is no assurance that they are, they simply do not exist in the numbers needed to challenge an American formation of next-generation fighters. To quote the famous Sun-Tzu: “mass matters.” This seemingly timeless concept still applies today in an extremely high-tech warfare environment.

As for China’s J-20 and J-31 aircraft, Pentagon reports and lawmakers such as Rep. Rob Wittman (R-Va), the ranking member of the Seapower and Projection Forces Subcommittee, express dismay that much of China’s stealth fighter technology appears to have been stolen from the United States. Chinese cyber theft of U.S. weapons technology has been well documented and openly discussed as a serious concern. In fact, the external configuration of a J-31 jet looks strikingly similar to the stealthy blended wing body of the F-35. Likewise, the J-20 has external similarities with both the F-22 and F-35 fighters.

“[Y]ou know, most of the technology from the J-20 was stolen from the United States. But nonetheless, we have to deal with that, but it should remind us what we need to do to protect our technology. But also what it reminds us is that you know where we are taking the next step with the Bravo [F-35B], the Alpha [F-35A], and the Charlie [F-35C], as they are incredibly capable aircraft. What we can do to take those aircraft and move them in the areas where we can also use other platforms,” Wittman told the National Interest in an interview.

The real margin of difference between Chinese and U.S. fifth-generation aircraft, however, likely resides in technologies and performance parameters not entirely related to external configuration. Of course, the nature and effectiveness of radar absorbent materials would be impactul—and that is something that is potentially not fully known about the Chinese aircraft—but stealth configurations alone would not be sufficient to ensure overmatch or air superiority. In a fight between China and the United States, the better aircraft would more likely be determined by the quality of computing, artificial intelligence-enabled data management systems, sensor range and fidelity, and weapons range and precision. For instance, as numerous Air Force wargaming exercises have shown, the F-35 is able to use its next-generation sensors and onboard computing systems to identify and destroy enemy aircraft from safe stand-off ranges before it can be detected. Such an ability would almost ensure overmatch in the skies. Therefore, the answer to which aircraft is superior may lie in a host of unknown or difficult-to-determine variables, such as the range, targeting, and sensing capabilities of Chinese and American fifth-generation aircraft.

“The neat thing about it is that the MEU is fully deployed with all three ships together with [landing platform, dock] and [landing helicopter assault] ships. It is incredible—what that platform and that view provide … is a credible threat to the Chinese,” Wittman said. “Especially if they look at doing a naval-amphibious operation on Taiwan, that's an incredible impediment to what they see as what they'd have to go through in order to land there on Taiwan and to pursue the effort to take Taipei. They don't have a compliment for that,” he added.

Sure enough, China does not have sufficient numbers of carrier-launched J-31 aircraft or a vertical take-off fifth-generation fighter capable of operating from amphibious assault ships. Yet Beijing is quickly building a new generation of Type 075 amphibious vessels, with the third ship already under construction. However, while these ships may operate helicopters, they do not appear to have fifth-generation air power onboard. Therefore, it seems relatively clear that any Chinese amphibious advance would be vulnerable to being destroyed by U.S. and allied air power.

Perhaps the most significant factor when it comes to deterring or destroying a Chinese attack on Taiwan may be related to U.S. allies. Should the U.S. Navy's forward presence—in the form of dual-carrier operations and Marine Expeditionary Units armed with amphibious vessels, drones, and stealth aircraft—be sufficiently “forward,” U.S. forces could probably arrive with enough time to counter, if not eliminate, an attacking Chinese amphibious force. Japan and South Korea, for instance, both have F-35 jets, and Japan is a U.S. partner with the Aegis Combat System, which is able to track and intercept ballistic missiles. If both states intervened, Japanese and U.S. warships in the Pacific would be well positioned to see and potentially intercept incoming Chinese-fired ballistic missiles headed for Taiwan. This is extremely significant, as any amphibious attack on Taiwan is almost certain to be preceded by a salvo of ballistic missiles capable of reaching Taiwan from Chinese shores.

“The way that we can most effectively deter China is for them to know that our allies—Japan, Australia, and others—can come to the fight quickly so that if they pursue things … we'll get some lead time, not as much lead time as maybe we would like, but we'll get some lead time on that,” Wittman argued. “And the question is, how quickly can we amass forces? And how quickly can we get our allies there? And that's going to be the key because not all the allies in the region, they're necessarily going to come initially to the fight? So the question is, how do we leverage that in ways that are better, [ways] that are quick and effective?” he continued.

Wittman’s reference to allied power in the Pacific is extremely significant, as the Pentagon has been accelerating efforts to strengthen and expand ties, joint training, and strategy initiatives with its key allies in the Pacific, including Japan, South Korea, and Australia. While such alliances are crucial for any deterrence posture, U.S. allies are also extremely capable warfighting forces, and they are only continuing to improve. Japan, for instance, recently made a multi-billion dollar F-35 purchase, a move that places fifth-generation aircraft closer to Taiwan and the Chinese border. South Korea is also an ally with F-35 fighters and has in recent years conducted joint patrols with U.S. aircraft.

Moreover, it is quite significant that both Japan and South Korea maintain massive ground forces. While any U.S. response to an assault on Taiwan would hope to destroy an attacking Chinese force from the air or undersea before the island could be annexed, the United States and its allies may recognize that they would also have to be prepared to forcibly “extricate” an occupying Chinese force from Taiwan. This contingency is likely why Taiwan continues to acquire Abrams tanks and other ground-war platforms.