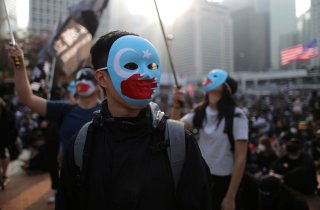 In response to U.S. sanctions on China over human rights abuses in the country’s western Xinjiang region, Beijing has announced sanctions on four members of the United States Commission on International Religious Freedom, a federal government commission that has been highly critical of China’s treatment of Uyghur Muslims in the province.

The four members in question—Chairwoman Nadine Maenza, Deputy Chairman Nury Turkey, and members James Carr and Anurima Bhargava—have each been barred from visiting mainland China or its two special autonomous regions, Hong Kong and Macau. Chinese Foreign Ministry spokesman Zhao Lijian indicated that any assets they had in the country would be frozen, although it remains unclear if they had any to begin with.

The sanctions escalated the dispute between the United States and China over Xinjiang, a dispute that has already led the U.S. to announce a diplomatic boycott of the February 2022 Winter Olympics in Beijing.

In December, Congress voted to ban all imports from Xinjiang—unless the importer could affirmatively prove that the imported goods had not been made with forced labor.

Such a precaution, members of Congress argued, was necessary because more than one million Uyghurs have been sent to “re-education” camps. Many of them have been reportedly engaged in forced labor at the camps. China has denied the allegations, and initially retaliated for the ban by calling for a boycott on foreign clothing brands.

The sanctions on the four commission members appear to be a specific act of retaliation for U.S. sanctions on two Chinese officials accused of participating in human -rights abuses in Xinjiang. The two sanctioned officials are Shohrat Zakir, who led the Xinjiang regional government until 2018, and Erken Tuniyaz, the current leader.

Zhao accused the United States of “interfering in Xinjiang’s affairs and China’s internal affairs,” suggesting that Washington should withdraw its “so-called sanctions” on the two men.

“China will make further responses in accordance with the development of the situation,” the spokesman said.

Zhao also indicated Beijing’s disapproval of the appointment of U.S. diplomat Uzra Zeya as “special coordinator for Tibetan issues.” Zeya has been tasked with promoting “respect for the human rights” of Tibetans. China has long regarded the status of Tibet as a purely internal matter and has harshly criticized Western pro-Tibet activists, accusing them of inciting secessionism.