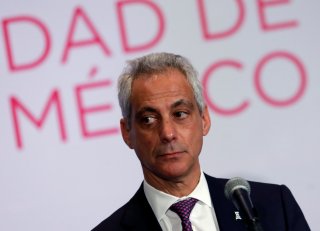 Career diplomat Nicholas Burns, former Obama chief of staff and Chicago mayor Rahm Emanuel, and thirty-nine other prospective diplomats were confirmed to ambassadorships in a late-night Senate session on Saturday.

The two were respectively appointed to lead America’s embassies in China and Japan. President Joe Biden had nominated them for their roles in August, but Senate Republicans had delayed their and other confirmations for months over political disputes.

Emanuel’s nomination became subject to controversy after reports circulated that his office had withheld information related to the shooting of an unarmed black teenager, Laquan McDonald, by a police officer in 2014. A video of the shooting was not released for more than a year, during which time Emanuel won re-election as mayor – leading to suspicions that his office had intentionally been buried to avoid controversy. (Emanuel’s office was later exonerated by an independent investigation.)

Although associated with the Democratic Party, Burns has been widely lauded for his service as an apolitical diplomat; his nomination received a much wider margin of support, with seventy-five votes in favor and eighteen opposed.

Other ambassadors appointed in the late-night session included diplomats to Spain, France, and the European Union. Nine federal district court judges were also confirmed during the session, along with five other positions.

Attempts to delay the nominations centered on the Biden administration’s alleged inaction over several foreign policy crises. Senate Republicans argued that the Biden administration had done nothing to oppose the Nord Stream 2 pipeline, which runs from Russia to Germany underneath the Baltic Sea, bypassing traditional conduits for Russian gas through Eastern Europe. U.S. national security professionals have warned that the pipeline, which is on the verge of approval in Germany, could make Europe increasingly dependent on Russian gas supplies and therefore less likely to criticize Moscow.

Republicans also pushed Biden and the Senate to respond strongly to human-rights abuses in China’s western Xinjiang region, where widespread human-rights abuses have occurred against the native Uyghurs. The Biden administration recognizes the treatment of the Uyghurs as a genocide.

The ambassadorial confirmation holds were dropped after the Senate unanimously banned imports from Xinjiang and agreed to hold a vote on Nord Stream 2 sanctions in January. Senate Majority Leader Chuck Schumer (D-N.Y.) had previously threatened to keep the Senate in session until the ambassadors and other personnel were confirmed—even through the holiday break if necessary.