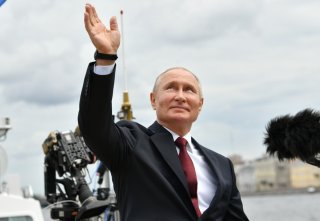 Russian president Vladimir Putin will no doubt feel extremely satisfied with the results of the meeting between a departing German chancellor and a U.S. president in his first year.

With barely sixty miles of the 764-mile Nord Stream 2 project left, Germany and the United States have just reached a deal that for the first time reflects tacit U.S. acceptance of the pipeline transporting Russian gas directly to Germany via the Baltic Sea.

The project ensures Europe remains heavily dependent on Russia’s natural gas as its top supplier while also jeopardizing the economic, energy, and national security of Central and Eastern Europe, particularly Poland and Ukraine.

But the Biden administration calculated that continuing to express its disagreement with a nearly finished pipeline only continued to strain its relationship with Germany for little benefit. The face-saving alternative is an agreement that pledges to establish a billion-dollar fund to provide energy security for Ukraine and sustainable energy initiatives across Europe. The down payment is roughly $250 million to promote Ukraine’s transition to clean energy and improve energy infrastructure security.

It also states that should Russia use energy as a weapon or military aggression in Ukraine, Germany will “press for effective measures at the European level,” including sanctions. But the Ukrainian government is hardly reassured or grateful. Instead, the vagueness of the agreement is diplomatically deliberate to suit the Biden Administration’s reluctance to concede its acquiescence to a deal that so advantages Russia as well as Germany.

Germany is Russia’s most lucrative gas market, and the new pipeline will double the gas trade between them. Germany will secure larger gas imports at cheaper prices, as well as making itself a hub of natural gas for Central and Western Europe. Germany’s commitment to the project is a continuation of its Ostpolitik approach to Moscow that began in the late 1960s. Aiming to reduce tensions, Germany sought to increase trade between it and the Soviet Union, particularly through energy deals.

The Bush administration voiced its opposition to the initial Nord Stream pipeline after it was announced in 2005. Following the beginning of service in 2011, an expansion project, creatively titled Nord Stream 2, was announced in 2015, attracting further criticism from the Obama administration. It intensified Washington’s concerns that the pipeline would help fund Russian militarism and jeopardize the energy security of Eastern European states. Russia has previously cut off gas imports to Ukraine over political disagreements disguised as pricing disputes, causing severe panic in Europe.

But although the European Union (EU) and NATO imposed sanctions on Russia for its actions against Ukraine seven years ago and the EU pledged to reduce its dependency on Russian gas, the bloc has only increased its reliance since. Nord Stream 2 will push this along further, with little assurance from either Berlin or Washington to counteract the Kremlin’s long-term strategy of increasing influence across Europe.

President Donald Trump did introduce sanctions against companies involved with Nord Stream in 2018 but this did not prevent the project from inching closer to completion.

President Joe Biden recently stated that “Nord Steam is 99% finished. The idea that anything was going to be said or done was going to stop it was not possible.” State Department officials continue to describe it as a “bad deal for Germany…a bad deal for Ukraine and for Europe more broadly.”

Last week’s agreement still reflects the growing realization in Washington that attempts to thwart Nord Stream 2 served only to undermine relations with Berlin. The White House is hopeful this will put an end to Russia highlighting the tension between Berlin and Washington—particularly when the departure of Angela Merkel as chancellor in September will inevitably mean a reset of what has been a difficult relationship.

Nord Stream and Nord Stream 2 have also increased tensions between Germany and its Eastern European neighbors. Both pipeline networks bypass existing routes running through Ukraine and other Eastern European states. Some 40 percent of Russian gas to Europe flows through Ukraine first, and the EU has led efforts to negotiate previous disputes. But because Russia will soon be able to punish Ukraine (and by extension Eastern Europe) by withholding gas without threatening its lucrative Western European clients, the willingness of the institution to act as a mediator will erode.

For future cutoffs, Ukraine risks not only a loss of transit fees, but also being suspended from a vital source of energy, without arousing the same international outcry. Eastern European countries connected to Ukrainian pipelines face the same dilemmas.

Former German chancellor Gerard Schroeder, who signed off on the original Nord Stream project days before leaving office in 2005, is chairman of the Board of Nord Stream, another indication of Berlin’s continued tight embrace of working with Russia.

For Russia, the benefits of a completed Nord Stream 2 are plentiful. It will help it counter Norway as Western Europe’s largest gas supplier, while the Kremlin will now be able to punish Ukraine without fearing as much backlash from Western European states. Additionally, it will receive higher revenues as it transports gas directly to Germany without filtering it through Eastern Europe.

And as an added bonus, the project has also expanded Russia’s military footprint. Russia has taken the initiative to increase its military presence in the Baltic Sea to protect its commercial interests, while blocking others. The dangers of allowing Russia unchallenged access to the sea on economic grounds were notably highlighted by Swedish defense minister Mikael Odenberg in 2006. Since 2014, Russian naval vessels have repeatedly disrupted the construction of the Nordbalt power cable, running from Sweden to Lithuania. And because neither Sweden nor neighboring Finland are in NATO, Russia has gained significant military leverage in the Baltic Sea.

The United States and Russia are holding more high-level talks in Geneva this week as part of the Strategic Stability Dialogue set up to encourage greater stability in the relationship and progress on arms control. The agreement with Germany over the reality of Nord Stream 2 formed part of the groundwork for this. But it won’t stop bitter complaints in Eastern Europe and from Republican lawmakers that the Biden administration has been willing to accede to Russian interests at the West’s expense.