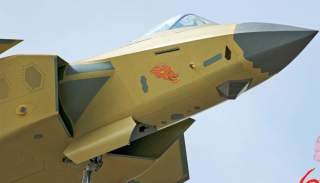 Meanwhile, the PLA Naval Air Force is already looking ahead to outfit those carriers with the gold-standard of twenty-first century military aviation: stealth fighters.

The J-15 Flying Sharks currently in service are an adaptation of Russia’s Su-33 Flanker jet. On paper, the Flying Shark has marginally superior specifications compared to the FA-18E/F Super Hornets flown by the U.S. Navy.

But in practice, the J-15 still suffers from numerous flaws, particularly related to its engines. Four of the roughly fifty J-15s built have already been lost in accidents. Furthermore, the J-15 can only carry a very light payload when taking off from the curved deck of China’s first two carriers.

Though the catapults and larger flight decks on China’s next four carriers should address this problem, the PLA Navy is apparently interested in a step change to operating a stealth fighter.

Stealth technology is by no means a perfect defense, but it allows for drastically greater survivability when facing enemy fighters and air defense systems which could launch missile attacks from dozens of miles away.

For China, those threats could come in the form of U.S. or Japanese fighters armed with long-range air-to-air missiles and warships armed with the powerful, multi-layered Aegis air-defense systems.

The latter bears a strong resemblance to a slimmed-down American F-35 jet—perhaps related to the fact that F-35 design schematics were stolen from BAe computers in 2007.

The Chinese military has displayed the J-20 to the public in recent events, but it has yet to order any of the lower-end Gyrehawks—which are officially for export. The FC-31 would likely be re-designated the J-31 if it ever enters Chinese service.

Though single-engine fighters are cheaper to build and operate, they typically carry less fuel and weaponry and often have lower maximum speeds. Relying on just one engine also means they are more likely to be lost in the event of an engine failure.

But space and weight are big issues when it comes to taking off and landing a huge fighter on a carrier deck. The J-31 reportedly weighs 17 tons empty and 31 tons at maximum takeoff weight, whereas a J-20 clocks in at 21 empty and maxes out at nearly 41 tons. Furthermore, the Gyrehawk is more compact at 17 meters long compared to the Mighty Dragon’s 22-meters.

To be fair, however, the now-serving J-15s are already larger than both at 24 meters, so length may not be an insurmountable obstacle.

Of Fighter Jets and Economic Recessions

By mid-2019, analysts and media were increasingly convinced the slighter J-31 was more likely to find its niche as China’s carrier-based stealth jet .

But on August 27, an article in the South China Morning Post flipped the consensus on its head: according to journalist Minnie Chen, defense insiders had indicated China’s Central Military Commissions were secretly tilting towards the larger J-20 over the J-31.

As the U.S. Navy has until recently relied on large twin-engine fighters (the F-4 Phantom, F-14 Tomcat, and FA-18 Hornet and Super Hornet), a larger carrier-based fighter is hardly beyond the pale. Despite the costs and disadvantages imposed by its size, the J-20’s likely higher maximum speed and capacious internal weapon bays suggest it might make a better interceptor and long-range strike plane.

The J-20’s claimed combat radius of 1,100 miles on internal fuel is more than double the unrefueled range of the American Super Hornet and beats the F-35C by nearly 66 percent. That means a Chinese carrier could theoretically launch J-20s to strike U.S. carriers or bases while remaining out of range of retaliatory strikes.

But according to Chen, the overriding factor favoring the J-20 is that it’s already in service and had matured from years of testing and operations, while only two FC-31 prototypes have been built.

The PLA Navy was not confident that the funding for such an expensive process could be assured in the event of an economic recession, and that it made more sense to stick with the proven J-20. As China has assigned different designations to its Flanker-family of jets (see the J-11, J-15 and land-based J-16), it possible a carrier-based J-20 will receive a new model and name, rather than being a sub-variant of an existing design.

While Chinese defense analyst Song Zhongping is quoted as suggesting the FC-31 might still show up as a little-brother complementing the J-20 on Chinese carriers, even Beijing will probably pass on funding two stealth fighters to perform broadly similar jobs.

We can reasonably forecast that a “navalized” J-20 would likely include folding wings for easier stowage inside the carrier; a tail hook to snag arrestor cables while making a landing approach; heavier, ruggedized landing gear designed to latch onto catapults and absorb the harsh shock of a carrier landing; and some form of automatic carrier-landing systems.

These modifications will add weight and decrease speed and range. Chinese engineers may try to compensate by trimming other systems, using more lightweight composite materials and/or enlarging the fuel tanks.

However, Chen’s reporting indicates that Chengdu is working on a shortened J-20 airframe to ensure compatibility with the catapult system on the forthcoming Type 003 carrier.

Another modification Chinse engineers might consider, found in the F-35C carrier fighter, is enlarged wings that generate more lift, allowing for slower speeds when attempting a tricky carrier landing. But airframe modifications could be complicated by the need to preserve the base plane’s stealthy geometry.

In early January, there were also graphics shown on Chinese media revealing Chengdu was investigating developing a two-seat J-20 variant optimized for the strike and/or electronic warfare role—and possibly capable of carrier operations. Back seaters greatly ease the load on pilots when handling guided air-to-ground weapons or jamming systems.

Again, however, stretching out a stealth jet for an additional crew member without increasing its radar cross-section could prove difficult—which explains why no one has developed a two-seater stealth fighter so far.

Both Chinese jets suffer from jet engine troubles. While China is struggling to finish development of an indigenous WS-15 turbofan engine for the J-20, it is making do with a Russian AL-31F turbofan with can produce only 77 percent of the thrust. Meanwhile, the FC-31 relies on the Russian RD-93 engine, while it awaits completion of a WS-15 turbofan also intended for use on JF-17 Thunder export fighter.

According to Chen’s sources, it will be at least a decade before China’s naval stealth fighters are operational, so the J-15 will doubtlessly take the lead on operations from China’s forthcoming flat-deck carriers. However, the question remains whether the PLAN will seek an all-stealth carrier air wing, or retain mixed wings including stealth jets and non-stealthy J-15s—similar to the U.S. Navy’s plans to mix Super Hornets and F-35C fighters.