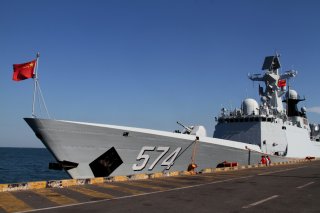 China’s Global Times newspaper quotes a Chinese military expert as saying that “China is aiming to build a blue-water navy capable of not only coastal defense but also far sea escort.” While China’s rapid maritime expansion is well known, it is significant that a Chinese government-backed newspaper would specifically refer to Chinese shipbuilding in the context of an expeditionary and “blue-water” navy, as opposed to merely a regional force. This ambition is by no means surprising and is of course well documented—China’s own written plans call for the country to be the dominant global force by 2049, if not sooner.

The pace of China’s shipbuilding is motivating many in the Pentagon to call for a larger U.S. Navy fleet and the potential expansion of shipyard construction.

The modern Type 055 destroyers may present a particular threat to the U.S. Navy, as they appear in some ways to be a hybrid blend between the U.S. Navy’s DDG 51 destroyer and the stealthy Zumwalt destroyer. However, the U.S. Navy will not build more than three of its Zumwalt-class ships, whereas China continues to build more Type 055s. The Type O55 destroyers are similar to Zumwalts in that they have a slightly rounded hull exterior and blended contours as part of what looks like an effort to lower a radar signature. At the same time, the Type 055’s hull also flares out and grows larger above the waterline in what also resembles a DDG 51. The new Chinese destroyers also have antennas and protruding vertical structures in the back of the ship near a helicopter landing area, something that also more closely resembles a DDG 51. When it comes to the full extent of the threat posed by China’s new destroyers, the margin of difference between U.S. and Chinese warships may be the range and precision of their respective onboard weaponry, command and control speeds, and sensitivity and resolution of their radar systems.

The arrival of these kinds of ships may be part of the U.S. Navy's motivation to move quickly with the construction of its emerging, high-tech DDG 51 Flight III destroyers and also vigorously pursue its next-generation DDG(X) destroyer.