Just How Stealthy Will the U.S. Navy’s DDG X Destroyer Be? 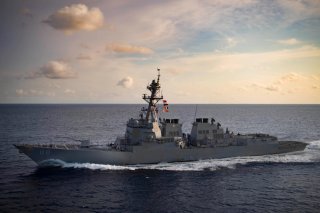 Will the U.S. Navy draw on the USS Zumwalt’s stealth and radar signature reduction technology as it crafts the hull for the Navy’s next-generation destroyer? The answer is not yet clear, but the Navy recently released an initial rendering of its new ship and has indicated that it will focus on improved “signatures.” At the same time, the service has made it clear that the ship will be a follow-on to the existing, less stealthy DDG 51 Arleigh Burke-class.

“As you might have noticed last year, we were being called the large surface combatant … designated officially [as the] DDG X to symbolize that we are the follow-on to the DDG 51 program,” Katie Connelly, the deputy program manager for the DDG X program, told an audience at the 2022 Surface Navy Association Symposium.

Given that the ship is intended as a follow-on to the DDG 51, it seems unlikely the Navy will build a wave-piercing tumblehome hull like the one used in the stealthy Zumwalt-class destroyers. However, Connelly emphasized that the rendering provided at the Surface Navy Association Symposium was preliminary and by no means indicative of what they ultimately plan to do. Connelly referenced signatures in her talk, perhaps suggesting that the new DDG X will have fewer protruding structures or edges that could generate a clear radar return signal.

Of course, a large destroyer could never be “stealthy” in the way stealth fighters are. However, the concept is to confuse adversaries by making the ship appear smaller on radar. For instance, following testing on the USS Zumwalt, Naval Sea Systems Command released a statement saying that the ship appears like a small “fishing boat” to radar systems, thus making it much less detectable at certain ranges. It might be possible to design a smoother, less jagged hull and exterior while still maintaining elements from the DDG 51 combat system.

“Decreasing vulnerability focuses on improved signatures [and] mobility looks at increased range, time on station, and efficiency. And the capability we are focusing on is a flight three combat system … with two additional RAM launchers and upgrades in the future as technology comes available,” Connely explained.

The Zumwalt, for instance, is heavily armed and is propelled by an integrated power system (IPS) that quietly generates electricity. Without sharp edges and protruding structures, the Zumwalt is extremely smooth and rounded. Of course, this is part of an effort to lower the ship’s radar signature.

Like the Zumwalt-class, the DDG X will have an IPS. According to Connely, the DDG X will also be equipped with new innovations that optimize energy storage and power distribution. This expeditionary mobile power is extremely crucial for systems like laser weapons, advanced computers, radar, and digital command and control technology.