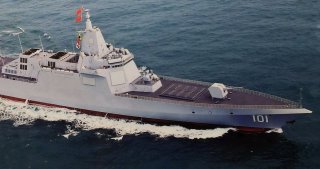 China's People's Liberation Army Navy (PLAN) isn't being stealthy about its efforts to produce the eighth Type 055 stealth destroyer this year. However, naval experts expect that it could still be five years for all the destroyers assigned to China's growing aircraft carrier strike groups (CSGs) to be fully combat-ready.

The South China Morning Post reported this week that China's eighth Type 055 stealth destroyer is now being painted at a shipyard in Dalian, suggesting that the warship could be very close to being launched. The facility is where a Chinese defense contractor routinely carries out much of China's naval shipbuilding—and this upcoming launch follows the most recent launch of the seventh Type 055 destroyer in May.

While that suggests the PLAN is speeding up efforts to get the destroyers operational for service with the CSGs, it could be some time before either of these warships is actually "combat-ready."

The first of the new class of stealth destroyers, Nanchang, formally entered service in January, which was two and a half years after its launch. The second of the class is still undergoing sea trials following its launch two years ago. Thus it could be at least three years before all eight of the vessels are in service following sea trials and crew training.

The Type 055 destroyers have a displacement of 12,000 tons and are considered the world's second-most powerful destroyer after the U.S. Navy's $4 billion Zumwalt-class. Reports suggest that the Nanchang has very similar-looking deck-mounted guns and a smooth, flat, roundly curved deckhouse, and there is a decidedly linear, inwardly-angled hull-deckhouse connection.

However, despite a similar appearance, it seems the Chinese destroyers may not have some of the troubles that the Zumwalt has faced. Moreover, while China may call the warships destroyers, the U.S. Defense Intelligence Agency's 2018 report on Chinese military strength has described the ships as guided missile cruisers—and at 12,000 tons, and 590 feet long these are in fact slightly larger than the American Ticonderoga-class cruisers.

Powerful By Any Classification

The PLAN's stealth destroyers were designed to fire surface-to-air missiles, anti-ship cruise missiles, land-attack cruise missiles and missile-launched anti-submarine torpedoes. It has been previously reported that some of the Type 055 destroyers have even been equipped with an advanced 20-megawatt turbo generator to power advanced high-energy weapons including lasers and rail guns.

Chinese efforts to develop a ship-mounted electromagnetic railgun have continued to move forward, and last year it was reported that a weapon that could be "capable of striking a target 124 miles away at speeds of up to 1.6 miles per second" was tested.

It is unclear at this point how many of the Type 055 destroyers have been employed with these generators, but the units would also quadruple the power-generating capacity for the warships—and even make full electric propulsion possible.

The Chinese warships were designed to serve with and protect the PLAN's next-generation Type 002 aircraft carrier, which is China's first domestically-produced carrier and it features an advanced electromagnetic catapult system.

In short order, the PLAN is truly becoming something of a potential force to be reckoned with—and these destroyers are making that fact abundantly clear.