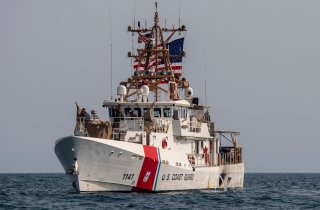 Contractor Austal USA has announced that the U.S. Coast Guard is set to receive new ships, specifically Offshore Patrol Cutters (OPCs). The contract covers $3.3 billion in funding for up to eleven cutters that will be built at the company’s shipbuilding facilities in Mobile, Alabama.

OPCs have a displacement of about 4,500 tons and measure 110 meters in length. Though not designed from the outset as a full blue-water patrol force in the same way that United States Navy vessels are, the ships are nonetheless highly capable and come with an array of weapons, including a 57mm main gun, M2 Browning .50 caliber machine guns, and a Bushmaster 25mm chain gun.

The ships’ organic naval radar system gives the cutters a self-defense function and limited air defense. Combined with the ship’s 57mm main gun, the Cutters also have an anti-surface warfare capability and can also offer naval gunfire support for troops on land.

“The United States Coast Guard’s new Offshore Patrol Cutters are an outstanding opportunity for Austal USA to further demonstrate the shipyard’s new steel shipbuilding capability; based on years of proven construction experience through the delivery of the LCS and EPF programs for the United States Navy,” Austal Limited Chief Executive Officer Paddy Gregg said in the press release.

“The Offshore Patrol Cutters are a critical capability in the United States’ homeland security and the Coast Guard’s most important acquisition program, and the Austal USA team is very excited and proud to be delivering this major shipbuilding program for the USA,” he continued.

The new OPCs replace the Coast Guard’s Reliance-class and Famous-class Medium Endurance Cutters, two Cold War-era ship classifications that are significantly smaller, with less than 2,000 tons displacement, shorter endurance, and lower capabilities and survivability. Construction on the new ships is anticipated to begin in 2023.

“This contract award is the result of our continued investment in our people and our facilities,” Austal USA President Rusty Murdaugh said. “We are thrilled for the opportunities this will bring to our local community and our tremendous supplier base, as this program will provide our shipbuilding team the stability for continued growth.”