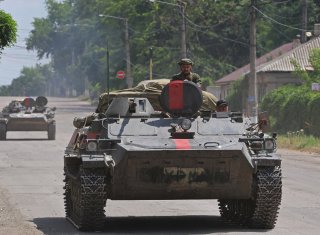 Central Intelligence Agency director William Burns criticized the Russian government on Wednesday for attempting to purchase drones from Iran, suggesting that the move was an indication of the poor state of Russia’s armed forces.

“It’s true that the Russians are reaching out to the Iranians to try to acquire armed drones,” the CIA director and longtime U.S. diplomat said during his remarks at the Aspen Security Forum in Aspen, Colorado—confirming earlier reports that Russia had attempted to purchase drones from Tehran. Some Western experts had treated these claims with skepticism, noting Russia’s traditional role as an arms exporter to Iran rather than the opposite.

Burns acknowledged that relations between Moscow and Tehran were sometimes fraught, and suggested that the extent of the two nations’ cooperation on security issues remained unclear: “They need each other, they don’t really trust each other, in the sense that they’re energy rivals and historical competitors.”

“It’s important to remind ourselves that [the proposed drone agreement is] a reflection, in some ways, of the deficiencies of Russia’s defense industry today, and the difficulties they’re having after significant losses so far in the war against Ukraine,” he added.

Since the onset of the Russian invasion of Ukraine, Russian leader Vladimir Putin has attempted to improve relations with Iran, visiting Tehran earlier in the week for a regional summit with Iranian supreme leader Ali Khamenei, Iranian president Ebrahim Raisi, and Turkish president Recep Tayyip Erdogan. The Russian and Iranian leaders reportedly spoke about bilateral commercial opportunities to skirt Western sanctions, which have been applied heavily on both Moscow and Tehran.

In his remarks, Burns described the Russian invasion of Ukraine as a “strategic failure,” noting that Russia had achieved few of its initial goals in the conflict, lost at least 15,000 soldiers and much of its heavy equipment, and had driven historically neutral Sweden and Finland to join NATO, doubling the Western military alliance’s border with Russia and placing its territory less than one hundred miles from St. Petersburg.

Burns also questioned the extent of Russia’s “no limits” partnership with China, which has offered criticism of the United States and NATO during the conflict but refrained from explicitly supporting Russia. In a United Nations Security Council vote condemning the Russian invasion, only Russia, Belarus, Syria, North Korea, and Eritrea supported the Russian position; China abstained, as did India and much of the Middle East.

“It seems to me that President Xi and the Chinese leadership have been unsettled to some extent, especially in the first phase of Putin’s war in Ukraine, by what they saw,” Burns said, speculating that Beijing’s initial optimism that the conflict would strike a decisive blow against the West had given way to frustration after it led to serious Russian losses and the unification of the United States and Europe.

The CIA director observed that the course of the conflict suggested that the risks of a prospective Chinese invasion of Taiwan would increase as time went on and warned that this might lead to pressure within Beijing to launch offensive actions as soon as possible.