Collision Path: Is a U.S. Confrontation Brewing in Russia’s Waters? 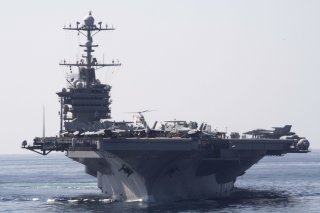 Moscow and Washington are embroiled in a fresh military-diplomatic crisis over the alleged incursion of a U.S. destroyer into Russian territorial waters.

Russia’s Defense Ministry announced on Friday that the U.S. Navy’s Arleigh Burke-class destroyer USS Chafee (DDG 90) attempted to violate Russia’s state border in the Sea of Japan. “Today, at about 5:00 p.m. local time, the US Navy’s destroyer Chafee (DDG-90), which has been operating in the Sea of Japan for several days, approached the territorial waters of the Russian Federation and attempted to cross the state border,” the Russian Defense Ministry said in a statement.

The Russian Defense Ministry specified that the Pacific Fleet’s Udaloy-class destroyer Admiral Tributs “warned” the Chafee’s crew of the “inadmissibility of such actions,” notifying them that they were operating in a shipping area closed off due to practice artillery firings scheduled as part of the Russia-China Joint Sea 2021 naval drills.

“After getting the warning, instead of changing its course to leave the closed area, the destroyer Chafee raised its colors implying that its helicopter was due to take off from its deck, which meant that the course and the speed could not be changed, and took actions to violate the state border of the Russian Federation in the Peter the Great Bay,” the Defense Ministry statement continued. According to the Russian Defense Ministry, Admiral Tributs proceeded to chase Chafee out of Russian territorial water. With less than sixty meters left between the two ships, the Chafee finally reversed its course.

In a press statement issued later that day, the U.S. Pacific Fleet press office labeled the Russian rendition of the Chafee-Tributs altercation as “false.”

“While USS Chafee (DDG 90) was conducting routine operations in international water in the Sea of Japan on Oct. 15, 2021, a Russian Udaloy-class destroyer came within approximately 65 yards of USS Chafee (DDG 90) while the ship was preparing for flight operations,” the Pacific Fleet statement read.  “The interaction was safe and professional. Although Russia issued a Notice to Airman and Mariners (NOTAM/NOTMAR) in this area for later in the day, the NOTAM/NOTMAR was not in effect at the time of the interaction.” The Pacific Fleet’s statement was accompanied by several photos of the Admiral Tributs taken from aboard the Chafee. It is difficult to determine from these photos precisely how far away the two vessels were from one another.

The Russian Defense Ministry, in turn, published a video claiming to corroborate its version of events. The video, filmed from aboard Admiral Tributs, shows a helicopter preparing to take off from Chafee’s deck. However, it is not immediately clear from the footage that Chafee is being actively chased or otherwise pressured to change course by the Admiral Tributs. As of the time of writing, neither side has provided corroborating evidence to show that the Chafee was, or was not, operating in mutually recognized international waters.

The Russian Defense Ministry has summoned the U.S. military attache to lodge a formal complaint over Chafee’s alleged violation of Russia’s territorial waters. “The position of the Russian military agency was conveyed to the representative of the US armed forces in relation to the US Navy’s destroyer Chafee’s attempted violation of the state border of the Russian Federation in the area of the Peter the Great Bay on October 15,” the Russian Defense Ministry said in its statement.