Columbia-Class: The U.S. Navy Is Bullish on the World’s Best Submarine 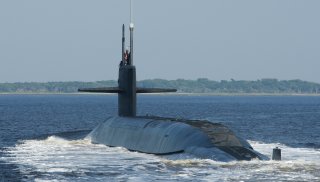 The Congressional Research Service, a non-partisan think tank that reports to the United States Congress, recently released a report on the current status of the U.S. Navy’s upcoming Columbia-class ballistic missile submarine program.

The Columbia-class forms the sea-based leg of the United States nuclear triad, complemented by land-based intercontinental ballistic missiles (ICBMs) as well as long-range strategic bombers. The report quoted the United States 2018 Nuclear Posture Review, which explained, “Ballistic missile submarines are the most survivable leg of the triad. When on patrol, SSBNs are, at present, virtually undetectable, and there are no known, near-term credible threats to the survivability of the SSBN force. Nevertheless, we will continue to hedge against the possibility that advances in anti-submarine warfare could make the SSBN force less survivable in the future.”

“The UK plans to replace the four Vanguard-class boats with three or four Dreadnought-class next-generation SSBNs. Dreadnought-class boats are to be equipped with 12 missile launch tubes, but current UK plans call for each boat to carry eight D-5 SLBMs, with the other four tubes not being used for SLBMs. The United States is providing technical assistance to the United Kingdom for the Dreadnought-class program, as it has over the years for some other UK submarine programs.”

The Navy has made it clear in previous years that the Columbia-class submarine program is their number one funding priority—and that the program will be funded even if producing the Columbias come at the expense of other Navy programs.

While the U.S. Navy previously relied on a fourteen-boat fleet of Ohio-class ballistic missile submarines to meet the requirement of ten Ohios out on patrol at any one time, the upcoming Columbia-class will require just twelve boats to meet that same ten boat requirement. This is thanks to the “midlife overhauls of Columbia-class boats, which will not include a nuclear refueling, will require less time (about two years) than the midlife refueling overhauls of Ohio-class boats (which require about four years from contract award to delivery).”