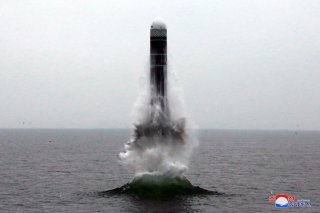 Satellite imagery first analyzed by the North Korean monitoring website 38 North revealed an unidentified object next to a quay at North Korea’s Sinpo shipyard. The shipyard serves as a naval base and is the epicenter of the North’s submarine-launched ballistic missile program, indicating the importance of the anomaly submarine.

Though the images did not reveal many specifics about the new submarine, what they did show was a submarine barge that can be used to give a rough estimate of the new sub’s capabilities. Considering the Sinpo shipyard location, the North’s new sub could be another step in North Korea’s evolving naval warfare.

The naval analysis H I Sutton suggested that the submarine may be a midget submarine, akin to the U.S. Navy’s dry combat submersible, used to insert Navy SEALs into coastal or underwater locations. This is due to the suspected submarine’s small size, estimated at 50 to 55 feet, or about 16 meters. Still, this wouldn’t necessarily bring new capabilities to the table that North Korea doesn’t already have, as midget submarines are already part of the DPRK’s navy. What may be possible is a miniature ballistic missile submarine.

Although the Hermit Kingdom maintains a fairly large submarine fleet, most hulls are quite dated Soviet legacy submarines. These older hulls are likely restricted to operations in littoral waters rather than open-ocean patrol. Still despite the limitations, submarines are one of, if not the best, options for preserving their nuclear deterrence capabilities.

To that end, North Korea is either actively developing, or may have already finished development of the Pukguksong-3 submarine launched ballistic missile. Though details on the missile are scant, it is believed that the North intends the missile to be nuclear-capable. Its range is quite modest by ballistic missile standards, under 2,000 kilometers, or about 1,250 miles. North Korea may not need much more range however, as Japan and South Korea would both be in the Pukguksong-3’s crosshairs in the event of a conflict.

Admittedly, the satellite imagery shows that the new submarine in question is significantly smaller than North Korea’s first indigenous ballistic missile submarine, the Sinpo-class. As a result, it may therefore be too small to house the Pukguksong-3 missile. But, the Sinpo-class carries only an estimated three Pukguksong-3 missiles, so it is possible this new hull may be an attempt to build an even smaller ballistic missile submarine.

Coming on the heels of the North’s explosive demolition of the joint North-South liaison office, this is one development worth following. But, until more imagery comes to light, we’ll be kept guessing.