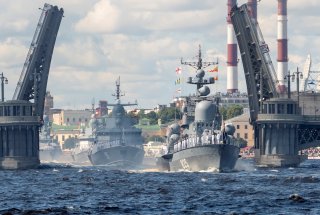 Over the weekend Russia successfully completed testing of its 4,600 miles-per-hour hypersonic missile, which was fired from the Project 22350 warship Admiral Gorshkov, the lead ship of a new class of frigates that incorporates the use of stealth technology. The new missile has the capability of traveling six times the speed of sound and can fly a range of up to six hundred miles, which means that it would reach its intended target in just seven minutes.

The timing of the test coincided with Russian president Vladimir Putin’s announcement that the Russian Navy would be armed with hypersonic nuclear strike weapons as well as underwater nuclear drones. The Russian Ministry of Defense has previously said both weapons are in the final phase of testing.

“The widespread deployment of advanced digital technologies that have no equals in the world, including hypersonic strike systems and underwater drones, will give the fleet unique advantages and increased combat capabilities,” Putin said during remarks made on Sunday’s Main Navy Parade in St. Petersburg according to reports from the Reuters News Agency.

While Putin did not specify when the Russian Navy would receive the hypersonic weapons, this weekend’s test suggests it could be soon. Putin has previously said that he doesn’t want to start a new arms race with the west, but he has also spoken about how Russia’s modern nuclear weapons are “unequaled” and have the ability to hit almost anywhere in the world.

The Zircon missiles—also known as Tsirkon—have been in development for more than twenty years and have been seen as a key next step for Putin’s military buildup. The combination of speed, maneuverability and altitude could make tracking and intercepting such hypersonic weapons quite difficult.

Moreover, the weapons were designed to attack ships as well as ground targets, and Russia’s latest frigates will be armed with the weapons. Yet, as Reuters reported, some western experts have questioned how advanced the systems actually are at this point.

Skepticism is in order as the technology of hypersonic missiles is still largely in the prototype stage and more importantly, the cost of each system is so high that it could be seen as cost-prohibitive to rely on them to actually overwhelm an enemy. Despite those facts, the United States is still moving forward with similar efforts to develop its own hypersonic missiles—simply because Russia and China are already working on the technology.

However, while Putin has said he doesn’t want a new arms race, that is exactly what the world could be facing, yet it isn’t just developing a new offensive platform but also the defensive systems to counter it. Here is where the United States could have a lead as the U.S. military is already working on countermeasures to hypersonic technology and it is less clear right now if Russia and China are doing the same thing.

For now, however, it is the Russian military that will have its moment in the spotlight.

“The tests of the Zircon hypersonic missile are also being successfully completed,” the Russian Defense Ministry said in a statement as reported by The Sun newspaper. “Test launches from the Admiral Gorshkov frigate have confirmed the unique tactical and technical characteristics of this missile in terms of range and accuracy of fire, as well as its hypersonic flight speed.”