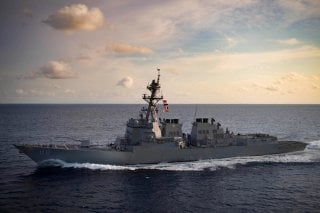 A recently updated Congressional Research Service (CRS) report shines a new light on the scope of China-U.S. competition in the East Asia region.

The document lays out a series of core American policy goals guiding the U.S.-China competition in the SCS and ECS. These include, but are not limited to

…fulfilling U.S. security commitments in the Western Pacific, including treaty commitments to Japan and the Philippines; maintaining and enhancing the U.S.-led security architecture in the Western Pacific, including U.S. security relationships with treaty allies and partner states; maintaining a regional balance of power favorable to the United States and its allies and partners; defending the principle of peaceful resolution of disputes and resisting the emergence of an alternative “might-makes-right” approach to international affairs; defending the principle of freedom of the seas, also sometimes called freedom of navigation; preventing China from becoming a regional hegemon in East Asia…

China’s “apparent goals,” meanwhile, include deterring U.S. forces in the region, intimidating or otherwise coercing neighbors into compliance, and garnering domestic support for the Chinese Communist Party’s foreign policy direction. The report canvasses the main elements of Chinese strategic behavior—these encompass “salami tactics” and grey zone operations aimed at wearing down neighbors over time, aggressive “island-building“ and “base-construction” practices in the SCS, and propaganda efforts intended to portray the United States as an “outsider or interloper whose actions are meddling or seeking to ‘stir up trouble’ in an otherwise peaceful regional situation.” The CRS report offers a comprehensive treatment of the many maritime territorial and Exclusive Economic Zone (EEZ) disputes between China and its neighbors, noting that these incidents have the potential to act as a conduit for maritime incidents between the U.S. and China.

The report maintains that Chinese dominance over the SCS would be a major boon for the People’s Liberation Army’s (PLA) growing umbrella of anti-access/area-denial (A2/AD) capabilities. Chinese ballistic missile submarines (SSBNs) would have a relatively safe space in which to operate, bolstering the Chinese navy’s comprehensive bastion defenses in the region. Though Chinese bases in the SCS would be vulnerable to U.S. strikes, they would also divert and delay American forces present in the area. The report argues that Chinese control over these waters would 1) hobble the ability of U.S. assets in the Asia-Pacific to intervene effectively during a prospective Taiwan invasion scenario; 2) enhance China’s ability to “coerce, intimidate, or put political pressure” on neighboring countries; 3) give Beijing a military and political foothold to project power into the Western Pacific; 4) jeopardize the long-term security postures of Washington’s Japanese, South Korean, and Philippine allies; and 5) facilitate China’s rise as a “regional hegemon in its part of Eurasia.”

The CRS report cites observers who have argued that Washington’s means in the SCS-ECS region have not always been in alignment with its ends, particularly when it comes to funding security assistance for regional allies and partners.