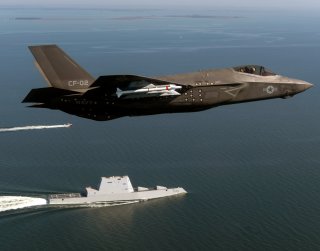 The U.S. Navy is crafting a carefully considered approach to ensure its next-generation DDG(X) destroyer can serve well into the 2060s. The service plans to take a hybrid approach, merging proven technologies with promising emerging systems to deliver paradigm-changing capabilities in the near term while also positioning the platform to remain dominant for decades to come.

One key component of this approach is optimizing the size, weight, power, and cooling (SWaP-C) balance so that the hardware footprint is consolidated and efficient. This will enable the ships to operate with even more energy density and carry as many power-generating technologies as possible.

A March 2022 Congressional Research Service (CRS) report on the DDG(X) program outlines this exact approach. “The DDG(X) would integrate non-developmental systems into a new hull design that incorporates platform flexibility and the space, weight, power and cooling (SWAPC) to meet future combatant force capability/system requirements that are not achievable without the new hull design,” the CRS report says.

These advancements are just the beginning of what maritime warfare may look like in the future, which is why Navy weapons developers and shipbuilders are now taking specific steps to engineer emerging technologies with a modular, open architecture approach that is intended to ensure sustained upgradeability. As new weapons integration options and software updates evolve, a technical infrastructure designed with common standards and internet protocol will be able to accommodate new systems without having to rebuild, redesign, or fully re-imagine the technological applications. This strategy can be seen in the Navy’s approach across a wide range of platforms, as well as in certain defense industry efforts. Northrop Grumman’s Integrated Power and Energy System (IPES), for example, seeks to greatly reduce hardware requirements by integrating a single energy storage and generation system to efficiently support weapons, radar, and computing systems. Northrop Grumman is offering its IPES system, which is reported by developers to be “ready now” and not subject to the extensive risks associated with longer-term programs, to be considered for the Navy’s DDG(X) program.

“We want to take the proven energy storage capability the Navy has and apply it to DDG(X). The Navy will see savings of as much as 30 percent for prime power cost and 20 percent for SWaP,” Matthew Superczynski, chief engineer for Northrop Grumman’s Power and Control Systems program, told the National Interest in an interview.

Northrop Grumman has engineered its approach to IPES with this operational and developmental concept in mind. Now, it plans to progressively upgrade its power management, storage, and distribution systems to essentially “grow with” emerging surface ship technologies.

“The DDG(X) platform will have the flexibility to rapidly and affordably upgrade to future warfighting systems when they become available as well as have improved range and fuel efficiency,” the CRS report states.

The architects of the IPES program want to offer the Navy a non-developmental, low-risk system that is extremely upgradeable in order to enable continued, high-speed modernization while simultaneously avoiding risks often associated with a brand-new developmental effort.

“Our solution has the capability they need and is lower risk given its level of maturity. We are not looking to take on too much risk. What we are offering is a more surgical implementation of an energy magazine and setting the architecture for the future," Superczynski added.