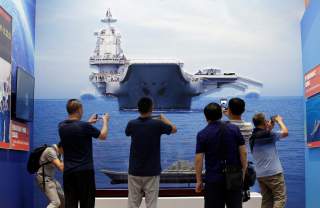 The rapidly-spreading novel-coronavirus epidemic is slowing the production of key weapons systems in China, in particular, the Chinese navy’s third aircraft carrier.

The slowdown is a reminder that even in China, a country that in recent decades greatly has expanded its development and acquisition of modern weaponry, reality has a way of tamping down the loftiest military-technology ambitions.

The coronavirus possibly took root in a market that illegally sells protected wildlife as food. The virus, which causes respiratory distress, so far is most dangerous to the elderly.

According to GlobalData, a London data-analytics firm, the coronavirus “is beginning to have an impact on Chinese defense companies and shipbuilders in Wuhan,” the city in central China where the flu-like disease first began spreading back in December 2019.

The virus since has infected nearly 30,000 across the world and killed nearly 600, most of them in China.

“The coronavirus has the potential to slow the delivery of key projects such as China’s third aircraft carrier and new fighter jets,” William Davies, a GlobalData analyst, stated in a release.

According to GlobalData, Shanghai’s Jiangnan Shipyard, “the largest modern shipbuilding base in China,” extended the Lunar New Year vacation for workers and advised any workers who traveled during the holiday to stay home for two weeks.

Jiangnan is building China’s third aircraft carrier, its first of a purely domestic design. The Chinese fleet’s first two flattops are of Soviet design and lack important systems such as catapults.

Shenyang Aircraft Corporation, which builds fighters for the Chinese navy and air force, also has told staff to stay home, according to the London firm.

“Whilst this delay will only have a minor impact in the short term, if the crisis continues and companies are forced to halt production for a longer period then this could have long term impact on China’s shipbuilding timelines,” Davies explained. “As the virus develops further, it will almost certainly affect nearly every industry.”

The suspension of work at Jiangnan underscores the mounting difficulties China has faced in producing a large fleet of aircraft carriers. Instead of speeding ahead with the development of a six-carrier fleet -- two each for the northern, eastern and southern fleets -- the Chinese navy could stop after acquiring flattop number four, an acquisition that the current epidemic could delay.

“Plans for a fifth [carrier] have been put on hold for now, according to military insiders,” the Hong Kong South China Morning Post reported in November 2019. “They said that technical challenges and high costs had put the brakes on the program.”

The Chinese defense ministry declined during a November 2018 press conference to specify how many carriers it ultimately planned to acquire.

In 2019, each fleet possesses between 20 and 30 major surface warships, at least a dozen submarines and a handful of amphibious vessels. Just one, the Northern Theater Navy headquartered in Qingdao, operates an aircraft carrier -- Liaoning, China's refurbished, former Ukrainian flattop, which commissioned in 2012.

The second carrier Shandong, a slightly-improved copy of Liaoning and China’s first home-built flattop in late 2019 is completing sea trials. Carrier number three, under construction in Shanghai, is a bigger vessel than Liaoning and Shandong are. Flattop four apparently would be a copy of the third vessel.

Liaoning and Shandong both displace around 55,000 tons of water. Their powerplants are non-nuclear and, for launching planes, they feature ramps rather than American-style catapults.

The ramp layout probably limits aircraft to a maximum launch weight of 30 tons, a former Chinese navy source revealed. At that weight, a J-15 carrier fighter cannot carry a full load of fuel and weapons, limiting them to brief fights over short distances.

The third and fourth carriers reportedly will have catapults, allowing them to launch heavier planes including fully-armed fighters and radar-early-warning planes. Beijing’s long-term ambition to develop nuclear-powered flattops are on hold, South China Morning Post explained.

The U.S. Navy possesses 11 nuclear-powered carriers plus nine assault ships that can embark F-35B jump jets. China’s struggle with the coronavirus could help the United States to maintain this lead.