Coronavirus Is Taking Down Warships Everywhere 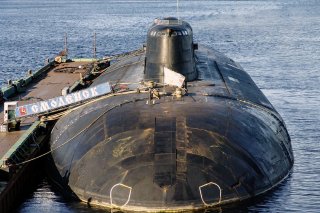 Packed with people and often far from home, ships are perhaps the perfect vector for viral outbreaks. It should come as no surprise, then, that warship crews all over the world are beginning to fall victim to the coronavirus pandemic.

The Russian navy has quarantined the entire crew of the submarine Eagle, Russian news site B-Port reported on March 26, 2020. Eagle is an Oscar-class guided-missile boat in the navy’s Northern Fleet. An Oscar typically has a crew of 112 people.

“The reason for quarantine was the contact of a civilian specialist who arrived on a submarine as part of a business trip,” B-Port explained. “Presumably, he was on the same board with a man whose coronavirus had previously been confirmed.”

B-Port noted that the crews of a “neighboring” submarine and a repair vessel also are in quarantine.

Meanwhile, on March 30, 2020, eight sailors aboard a Dutch submarine reportedly fell ill with the coronavirus, compelling authorities to order the vessel back to base.

The virus disproportionately affects all ships, not just naval vessels. Cruise ships, in particular, were an early vector. “Cruise ships present a perfect way to confine a significant group of people in one place,” Dmitry Korkin, a “bioinformatics” expert at Worcester Polytechnic Institute, told The National Interest.

“The traffic density of people on a cruise ship is incredibly high. In addition, the absence of a nearby hospital creates difficulties in diagnostics and treatment of the passengers. Dining rooms facilitate spreading the virus through fomites and through the common air.”

Crew have contracted the coronavirus on several U.S. Navy vessels. The situation on the aircraft carrier USS Theodore Roosevelt perhaps is the most severe. The Nimitz-class carrier, with around 4,000 sailors aboard, is in port in Guam while her skipper Capt. Brett Crozier deals with a coronavirus outbreak.

Crozier sent ashore a small number of infected sailors. He then wrote a letter to his superiors begging for help. “The only effective method to preserve an individual’s health is total isolation for 14-plus days,” Crozier wrote on March 30, 2020. “Due to a warship’s inherent limitations of space, we are not doing this. The spread of the disease is ongoing and accelerating.”

Crozier made it clear he would obey orders. “If required the USS Theodore Roosevelt would embark all assigned sailors, set sail, and be ready to fight and beat any adversary that dares challenge the U.S. or our allies. The virus would certainly have an impact, but in combat we are willing to take certain risks that are not acceptable in peacetime.”

“However, we are not at war, and therefore cannot allow a single sailor to perish as a result of this pandemic unnecessarily. Decisive action is required now.”

Acting Navy Secretary Thomas Modly insisted the service was working on the problem. “Our command organization has been aware of this for about 24 hours and we have been working actually the last seven days to move those sailors off the ship and get them into accommodations in Guam,” Modly told CNN.

“The problem is that Guam doesn’t have enough beds right now and we’re having to talk to the government there to see if we can get some hotel space, create tent-type facilities.”