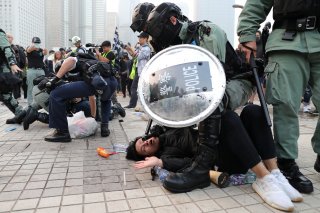 Hong Kong’s police raided the headquarters of Stand News, a pro-democracy online newspaper, and arrested six of its staff members for “conspiracy to publish seditious publications” on Wednesday.

Stand News was established in 2014. It has been the most prominent anti-Beijing voice remaining in Hong Kong since the closure of the Apple Daily, which was a larger newspaper. Its founder, Jimmy Lai, was sentenced to thirteen months in jail after he was found guilty of participating in an anniversary vigil marking the Tiananmen massacre of June 4, 1989.

The Hong Kong police issued a press statement that said two hundred officers had participated in the raid, which had been conducted with a warrant. It also allowed them to seize relevant materials, and photographs circulated on social media of the police carrying computers and documents out of the building.

Six of the newspaper’s staff, three men and three women, were arrested during the raid. The six staff members were not named but the group is known to include Patrick Lam, the newspaper’s editor-in-chief, and Denise Ho, a Hong Kong singer-songwriter and human-rights activist. Social media posts listed the other four as former editor-in-chief Chung Pui-kuen and staffers Margaret Ng, Christine Fang, and T. C. Chow.

The raid raises further doubts about media freedom in Hong Kong, which has undergone a sharp reduction in dissenting voices following the passage of a controversial national security law in 2020. That law, which effectively criminalized protests against the Chinese government, has been described as the end of the special administrative region’s “One Country, Two Systems” arrangement following its return to Chinese control in 1997.

At the time, Beijing had promised that individual rights in the territory, including press freedom, would continue to be respected. However, in the aftermath of the 2019–2020 protest movement against Chinese authority in Hong Kong, Beijing imposed stricter controls over the region, using restrictions put in place to stop the spread of the coronavirus as a justification for shutting down public pro-democracy events.

In separate incidents, two universities removed memorials to the Tiananmen Square massacre last week over concerns that they could be targeted politically for leaving them in place.

Although the national security law has been used to target more than one hundred other dissidents, including Lai, the seditious publications law that the Stand News journalists were charged under is a holdover from Hong Kong’s British era. During that period, newspapers were often restricted from advocating the territory’s unification with China.