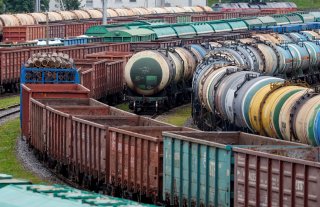 Lithuania announced on Wednesday that it was ending its month-long blockade of Russian goods sanctioned by the European Union (EU)—which prevented goods from the mainland from passing through Lithuanian territory to reach the isolated Kaliningrad Oblast—in response to a ruling by the European Commission permitting their transit.

The new guidelines were announced on Wednesday, ending a political crisis that had broadly increased tensions in Eastern Europe and led to growing threats from the Kremlin.

Kaliningrad, a Russian exclave located along the Baltic Sea, is separated from the Russian mainland by Lithuania and relies on road and rail transport from Russia for many of its goods. On June 17, Lithuanian officials cut off Russian train access to the territory, citing regulations against allowing the transport of goods sanctioned by the European Union, including lumber, metals, and vodka. Although Russian officials claimed at the time that goods shipments from mainland Russia to Kaliningrad would never leave Russian vehicles within the territory, making the country’s enforcement irrelevant, Lithuanian officials countered that the regulations forbade the transport of the goods through Lithuanian territory, regardless of the intended destination. During the month-long blockade, Russia continued shipments of non-sanctioned goods, including food, to the city through normal routes, while sending sanctioned goods via ship from the port of Saint Petersburg, Russia’s second-largest city.

Russian officials welcomed the decision, with a spokesman for the country’s Foreign Ministry describing it as a “demonstration of realism and common sense.” Anton Alikhanov, the governor of Kaliningrad, wrote in Russian on his Telegram channel that the removal of the blockade was “only the first step needed,” as other restrictions—notably on all military equipment and dual-use goods—remained in place. Alikahnov wrote that his office would “continue to work towards the complete removal of restrictions.”

The European Commission’s guidance clarified that cargo transported from Russia to Kaliningrad through EU territory should be allowed, as long as the volume of cargo did not exceed “the real demand for essential goods at the destination,” which it specified as the average shipments over the last three years.

Although the Lithuanian Foreign Ministry agreed to follow the guidelines, it noted that it viewed the previous guidelines, which allowed for the blockade, as “more acceptable”—noting that loosening the restrictions could “create an unjustified impression that the transatlantic community is softening its position and sanctions policy towards Russia.”