Decision Day: Who Will Build the Marines’ Advanced Reconnaissance Vehicle? 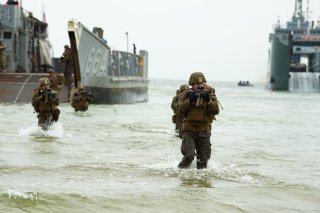 The Corps is now preparing to test new ARV prototypes from two major industry competitors. Textron and General Dynamics are both preparing to hand over vehicles to the Marine Corps for continued analysis.

“From 2019 to 2021, we were competitively selected to build a technology demonstrator with Marines and [Office of Naval Research],” Phil Skuta, General Dynamics Land Systems’ director of strategy and business development for the Marine Corps and Navy, told the National Interest in an interview.

The ARV is intended to be faster, more mobile, and more deployable than the Corps’ larger Amphibious Combat Vehicle. This would allow it to operate in a forward-supportive role, scouting enemy areas, conducting surveillance, and operating as a “sensor” within a larger multi-domain force. The vehicle is built with the capacity to elevate its mast and raise cameras up to higher altitudes to lengthen its sensor viewing envelope. Electro-Optical/Infra-Red cameras, for example, could potentially look over hills to detect threats at angles that might otherwise not be seen by the ARV.

The exact weight of General Dynamics Land Systems’ ARV is not available for security reasons. However, the platform is built so that four ARVs can travel from ship to shore on a Landing Craft Air Cushion (LCAC) or Ship-to-Shore Connector (SSC). This is quite significant, as the existing LCACs are not able to transport Abrams tanks and other very heavy loads. However, the newly emerging Textron SSCs will likely be able to carry multiple ARVs, making them transportable expeditionary vehicles. That is the Corp's intent, it appears, as it aligns with the service’s recently published Force Design 2030, which called for the divestiture of tanks in favor of a faster, more expeditionary multi-domain amphibious fighting force.

General Dynamics Land Systems says it will finish its prototype vehicle by September in preparation for delivery in December. Following additional testing and live fire exercises, the Corps will move into full production and is expected to make a choice between Textron and General Dynamics’ offerings.

There is a possibility, however, that the Corps could wind up choosing to merely upgrade the BAE-built Amphibious Combat Vehicle with a new generation of sensors and technology, which could allow it to perform the requisite surveillance operations. That decision has not been made, and the Corps has been pursuing its ARV program for many years, an effort that is likely to enter a more substantial production phase in the near future.

Prior to delivering its prototype, General Dynamics plans to refine and test its design so that it is “production ready” should the Corps seek to move forward. In order to do this, Skuta said, General Dynamics is working with the Marines on three key areas of innovation to ensure the ARV can continue to be upgraded and modernized in the coming years.