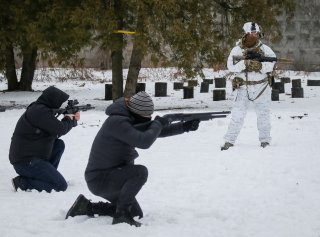 Desperate times call for desperate measures, and it seems that the Ukrainian Territorial Defense Forces are quite desperate indeed. Reports indicate that Ukraine’s reserve forces are relying on small arms that may have been carried by the Red Army during World War II. A video making rounds online showed a volunteer instructing members of the defense forces, who often lack any weapons, how to use the pre-World War II DP-27 light machine gun.

In the video, volunteer instructor Ivan Savelyev reportedly tells the other volunteers, “In my opinion, there are no old machine guns. The technical characteristics and main tactics of any weapon depend on the user and what kind of training they have received.”

With its top-mounted pan magazine the Pulemyot Degtyaryova Pekhotny (Degtyaryov’s infantry machine gun)—better known as the DP-27, even if in the West it has typically been referred to as the DP-28—was actually a rather efficient design for the era.

Developed by Soviet small arms designer Vasily Degtyaryov, the DP-27 light machine gun was reliable, accurate, and, most importantly, durable. As with other Soviet small arms of the era it could be manhandled, used in foul conditions, and still worked like it was new. It could, and did, endure freezing temperatures and continue to lay down fire on enemy positions when other weapons of the time wouldn’t function.

One look at the weapon and it isn’t hard to see how it earned the nickname “the record player” or “Stalin’s phonograph,” as it featured a large pan magazine on the top that held forty-seven rounds of 7.62x54mmR ammunition, the same caliber that was used in the Soviet military’s Mosin Nagant bolt action rifle. Despite similarities in design, there is no evidence that it was based on the American-developed Lewis Gun that was used by the British military during World War I and II.

The top-loading pan magazine used gravity to aid the feeding process, similar to the British Bren Gun and other light machine guns of that era that also featured top-loading magazines. However, in the case of the DP-27, the round magazine ensured that the line of sight over the weapon wasn’t compromised. By placing the rounds on top of the weapon it also provided mobility that was lacking in belt-fed light machine guns.

The DP-27 was heavier than a rifle, but a single Red Army soldier could still carry and operate the weapon. However, despite what video games may suggest, it would be near impossible to fire from the hip while moving with any accuracy. It was equipped with a bipod and was generally used by a soldier in a prone or kneeling position.

The light machine gun featured a simple design with very few parts—just eighty in total in the early models—compared to other machine guns of the era. The gas operated weapon was able to fire approximately 550 rounds per minute, a lower rate of fire than some machine guns but this actually helped reduce the risk of the barrel overheating. The biggest downside was that the magazine held just forty-seven rounds, and could be somewhat tricky in the field to change out quickly.

It isn’t clear how many DP-27s the Ukrainian Territorial Defense Forces have in its arsenal or where the weapons came from. However, it wouldn’t be the only vintage weapon in service. Videos have also surfaced that show that some volunteers have manned the M1910 Russian Maxim heavy machine guns.

Like the DP-27, the M1910 Maxim is chambered for the 7.62x54mmR cartridge, a round that is still in service with the Ukrainian Army. Those weapons may be old, but they were used successfully to stop the German invaders. The difference now is that they might be used to stop an invasion from the east by Russia.