Despite War, UN Says 30,000 Refugees Returning to Ukraine Every Day 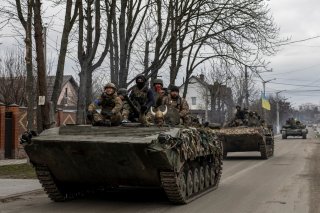 A recent United Nations (UN) report sheds light on how Ukrainian civilians are coping with an invasion that has triggered Europe’s biggest refugee crisis since World War II.

The UN Office for the Coordination of Humanitarian Affairs said that 30,000 people are crossing back into Ukraine every day. That figure was drawn from Ukraine’s State Border Guard Service and appears not to have been independently verified. The estimate is seemingly a gross figure, not a net one; though 30,000 Ukrainians are allegedly returning every day, it is unclear how many more are fleeing as hostilities rage on in the country’s east. The UN report cautioned readers against drawing concrete conclusions from these preliminary figures, noting that the situation on the ground “is still very fluid.”

According to the UN High Commissioner for Refugees, over 4.7 million people have fled since the war began. Poland has taken the brunt of refugee inflows, accepting almost 3 million people. Around 750,000 and 550,000 are in Romania and Russia, respectively. The UN found that 870,000 people who fled Ukraine since the Russian invasion have returned. The return of some Ukrainians is motivated, in part, by the growing sentiment that the war could drag on for years, and that they would rather see it through in Ukraine than live indefinitely as refugees in a foreign country. Most fighting-age men have been banned by wartime law from leaving the country since they might be called to military service. The law is not absolute, however, with Western and Ukrainian media outlets recording cases of bribery by men desperate to leave the war-torn country.

Ukrainians returning to their country are confronted with a growing cascade of domestic challenges. According to UN data, as many as seven million Ukrainians are internally displaced. Many have left central and eastern Ukraine for Lviv, a major hub in the country’s west that has been relatively untouched by the war, but the city reportedly reached the limits of its capacity to absorb refugees in the first few weeks of the war. The UN has warned that large swathes of Ukraine are suffering from “immediate food insecurity issues,” with another 11 percent of the country’s regions expecting food shortages within the next two months.

Residents in cities besieged by Russian forces have been subjected to shelling and airstrikes while being wholly or partially cut off from access to water and electricity. The siege of Mariupol, where the Kremlin has now declared victory, became one of the war’s largest humanitarian catastrophes. Experts are warning that a similar fate may befall the city of Kharkiv, widely believed to be the next major target on the Russian military’s path to consolidating control over eastern Ukraine.