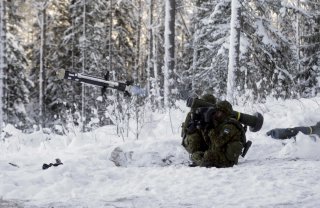 American Javelin anti-tank missiles have made all the difference on the battlefield in Ukraine. But now, the embattled Eastern European democracy needs more.

American Javelin missiles have helped turn the tide against Vladimir Putin’s war of aggression and the Russian war machine. The missiles are relatively lightweight and portable and wreak havoc on Russian armored vehicles and some aircraft.

Thanks to the Javelin’s infrared guidance unit, operators can launch the weapon and quickly seek cover. The weapon’s top-attack ability allows the high-explosive anti-tank projectile to engage armored vehicles where their armor is thinnest—on top.

But the Javelins, first produced in masse in the mid-1990s, rely on shuttered production lines, and replenishing quickly-depleting stockpiles will be a challenge. But, Lockheed Martin, the defense company behind the weapon’s design, plans to build more Javelins, even ahead of anticipated orders from the U.S. government.

James D. Taiclet, Lockheed’s president, chairman, and CEO, responded to questions about how the company thinks about future demand for more Javelins among the United States, NATO allies in Europe, and Ukraine. He told the Atlantic Council that the company recognizes the situation’s urgency and is moving ahead of contracts.

“In something this urgent, we’re going to go ahead and invest ahead of need, as it’s called, because the need is pretty obvious and so we’ve moved out ahead of that. So we’re investing in a couple of things—our own factories, so that we can buy equipment, hire more people, expand the footprint of the space, things like that,” Taiclet explained.

“But we’ve also got to help and work with our suppliers because there are thousands of parts in these products and, for example, just microprocessors alone, there’s about 250 microprocessors in every Javelin unit,” he added.

“So we have to help our suppliers get ready to bulk up their capacity, too, and so we may prefund them to help them do that. So those are the kinds of things that you can do proactively as industry, and I know some of our industry cohorts are thinking or doing these same kinds of things.”

The ongoing Covid-19 pandemic has snarled component sourcing in the Javelin supply chain, sourcing that has yet to be fully rectified, Taiclet explained.

“We’ve been able to keep up production pretty well, but most of the aerospace and defense industry in the third quarter of last year, like 2020, the—you know, the effects started to be felt from COVID in the supply chain restrictions early in the supply chain, right,” Taiclet said.

“So the microprocessors, the smaller parts, forgings, and castings that are made a year to a year and a half before they go into an actual product like an airplane, that started to flow through because what happened in, say, you know, 2020—early 2020—now was at the factory front gate.

He added that Lockheed Martin is not “getting what we thought and planned to get at that time, and so that slowed down some of the production of our larger systems and that happened across the defense and aerospace industry. Much of that has been relieved but it’s not completely gone, and so we’re recovering from essentially COVID-related supply chain issues even today.”

Although the company has several kinks in the supply chain to work out, it is still moving full steam ahead in anticipation of future Javelin missile orders from the United States government to replenish domestic stockpiles and to enhance allies’—and particularly Ukraine’s—capabilities.